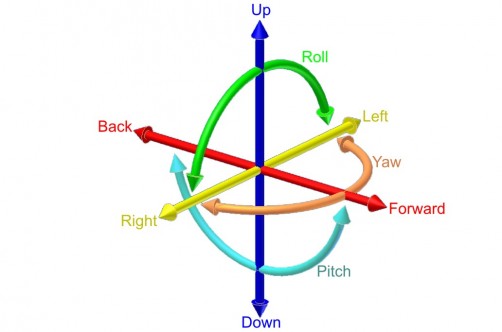 Safety standards and previous research have only used 3DOF measurements (the blue, red, and yellow lines) of mTBI to predict incidence, but researchers at Stanford have found that 6DOF measurements may improve mTBI prediction. The rotational movements (turquoise, orange, and green lines) seem critical in predicting mTBI.

Newswise — A preliminary study conducted by researchers funded by the National Institute of Biomedical Imaging and Bioengineering (NIBIB) may improve our prediction of mild traumatic brain injury (mTBI). Every year more than 40 million people worldwide suffer from mTBI(1). 3.8 million concussions occur in the US each year during sports and recreation alone(2). Most often mTBI affects competitive athletes in contact sports, as well as soldiers—those with jobs where repeated jolts and impacts can cause the brain to move inside the skull with enough force to cause damage. However, recent research has shown that even those playing sports not usually considered “contact sports” such as baseball, as well as amateur athletes, are suffering from neurodegenerative diseases that seem consistent with mTBI. The problem is that while some patients with mTBI experience a loss of consciousness or concussion at the time of the injury, many do not. This can mean that those who have mTBI may not immediately realize the extent of their injury since the appearance of symptoms can occur hours or even days later. Others may feel some symptoms earlier, but do not report them because they do not want to be pulled from the game. As a result, the only criteria most doctors can reliably use to diagnose mTBI at the time of injury is loss of consciousness.

It is important for patients who have sustained mTBI to rest and avoid any chance of another injury. Devices that can measure the force of impact have been implanted in helmets and mouthguards and given to athletes in the hope that they can gather real-time data to predict and prevent brain injury. However scientists have not yet found a standard of head motion measurements that can accurately predict whether or not someone has sustained brain injury. Current safety standards use 3 degrees of freedom (3DOF)—up and down, forward and backward, and left and right—to measure the acceleration of impact and try to predict the amount of head acceleration necessary to cause mTBI.

This was the first time a study was conducted that included rotational head motion measurements of clinically-diagnosed mTBI in the analysis, allowing researchers to study how to best predict the two cases of mTBI in the 518 measured impacts at 19 different athletic events over the course of 3 years. The researchers were able to gather a set of preliminary data detailing more exact criteria on the head accelerations required to cause mTBI—specifically that peak strain in the corpus callosum seemed to be the best predictor of mTBI.

“While this is only a small study and further research is necessary, I think that it is an exciting step forward in understanding what needs to be considered to better predict mTBI,” said Dr. Grace Peng, Program Director for Mathematical Modeling and Simulation and Analysis at NIBIB. “The ability to diagnose mTBI at the time of injury could help protect athletes from further brain damage, reducing their risk of neurodegenerative diseases.”