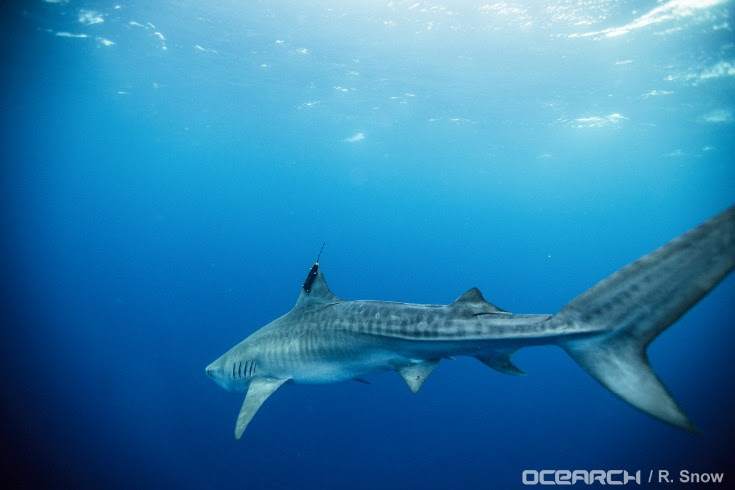 Newswise — A tracking study of 56 sharks provides a first look at how their patterns of movement across the Gulf of Mexico vary according to their sex, their life stage, and the season. Matthew Ajemian of Florida Atlantic University, U.S., and colleagues present these findings in the open-access journal PLOS ONE on July 15.

Tiger sharks are highly migratory and are found in coastal and open-ocean waters worldwide. The International Union for the Conservation of Nature has labeled them a near-threatened species. Previous studies have revealed the presence of tiger sharks at all life stages in the Gulf of Mexico, but until now, none have investigated how tiger sharks’ movements within the Gulf vary according to their life stage.

Between 2010 and 2018, Ajemian and colleagues tagged 56 tiger sharks of varying life stages with Smart Position and Temperature (SPOT) transmitters, enabling them to track the sharks’ movements via satellite. The tags transmitted data every time the fin penetrated the surface, and supported tracks for up to 695 days.

The tracking data revealed that movement patterns varied by life stage, sex, and season. Older sharks appeared to travel faster and swim into deeper habitats off the continental shelf more often than did juvenile sharks, especially during fall and winter. After accounting for size differences, the maximum rate of movement was higher for female sharks than for male sharks.

The analysis also showed that some core habitats of tiger sharks—specifically those along topographic features known as shelf-edge banks—overlap with locations designated by the National Oceanographic and Atmospheric Administration as Habitat Areas of Particular Concern. Core habitat regions were also found near 2,504 oil and gas platforms.

These findings could help inform investigations into the potential impact of climate change, oil spills, and other environmental factors on tiger shark movement in the Gulf of Mexico. Future studies with larger sample sizes and alternative tracking strategies could help deepen understanding of the species movement patterns.

Ajemian summarizes: “Our multi-institutional team synthesized satellite tagging efforts from Texas to Florida to reveal, for the first time, how tiger sharks use the Gulf of Mexico large marine ecosystem. Our work highlighted a few important “hotspots” within this region, particularly along the edges of the continental shelf where these sharks appear to cross paths.”

Funding: This research was funded by grants from the Texas State Aquarium to GWS and MJA and the Aquarium at Moody Gardens to RJDW.

In your coverage please use this URL to provide access to the freely available article in PLOS ONE:  https://journals.plos.org/plosone/article?id=10.1371/journal.pone.0234868