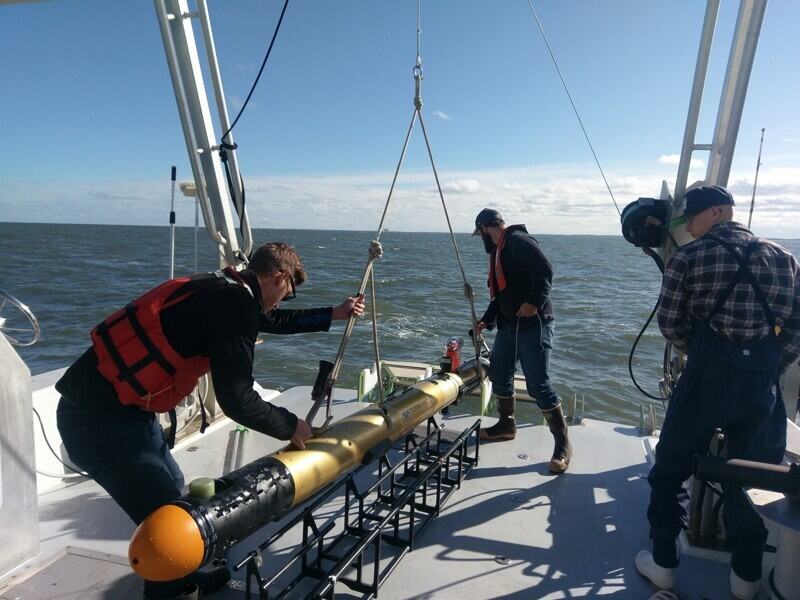 Newswise — The legacy of two world wars, live fire training exercises and the purposeful disposal of munitions in coastal waters by militaries in the United States and nations across the globe has caused concern when some of those areas are used for recreational and commercial activities, such as offshore energy initiatives.

Unexploded ordnance has been washing up on beaches for years, with one surprised fisherman reeling in a navy rocket from Rock Harbor, Massachusetts in April of 2018. Additional concern is that chemicals from these munitions could potentially leach into and contaminate ground water.

While there have been many studies on how waves and currents move munitions in sandy settings, many of the sites where these munitions of concern were dumped are located in silty, muddy settings.

Because of this, the University of Delaware’s Art Trembanis and doctoral candidate Carter DuVal wanted to learn how unexploded munitions move in these muddy, estuarine environments.

The project is funded by the Department of Defense under the Strategic Environmental Research Development Program (SERDP) and is one of the first to examine how unexploded ordnance move in these types of environments.

“We wanted to find out if our assumptions and models of how we seem to be seeing unexploded ordnance move in sandy settings, if we could use those same assumptions in muddy settings,” said Trembanis, associate professor in UD’s College of Earth, Ocean and Environment (CEOE). “If not, do we need to change how we approach and model and predict how these might move around?”

From 1917 through 1970, the United States actively disposed of munitions in the ocean until Congress put an end to the practice.

UD researchers were able to identify more than 100 formerly used defense sites that had some portion of their boundaries in tidally-driven, shallow, muddy estuaries.

“The overall goal is to try to help inform the efficient and safe management of these known sites,” Trembanis said of why the research matters.

Because the Delaware Bay is one of the largest estuaries on the East Coast, it served as a perfect test site for their study.

“The Delaware Bay is an estuary that has shallow, muddy sites within it, so we wanted to use that as a proxy to get a better understanding of the dynamics that are involved with explosives of concern in muddy environments,” said DuVal, a doctoral student in the School of Marine Science and Policy in CEOE.

Since 2017, the research group has done three deployments in the shallow areas of the Delaware Bay.

These munitions ranged from the very small, hand-portable size, to a medium munition to one that weighed nearly 100 pounds.

The researchers added sensors to the fabricated munitions similar to sensors found in cell phones — which record when they are moving by using a data logger.

Setting out the surrogates

In 2017, with the help of the Delaware State Police Scuba Team, led by Corp. Brian Greene, they dropped the surrogates in four meters of water and let them stay there for a month. No storms happened, but they were able to examine the system and see that it was working well, as they got accurate tag locations for the surrogates.

In the spring of 2018, there were four intense Nor’easters that hit the study site. When the divers recovered the surrogates, they noted to DuVal that the two smaller sized munitions were largely, if not completely, buried, while the larger munitions were sitting exposed in large scour pits. (A scour pit is a hole created when water moves quickly past a large object.) DuVal said the researchers were able to verify this with their data as well.

They had also gotten lucky, as the wind speeds were upper level and outlier events when compared to the last two or three decades of wind data available.

Despite burying in place or ending up in a scour pit, the munitions didn’t move horizontally.

“What we were seeing were about as high energy of storms that we anticipate would happen in this region for that time of year and we didn’t see any horizontal movement,” said DuVal.

When they took a closer look at some of the acoustic tracking data from one of the smaller surrogates, they did see that the energy from one of the storms was high enough that it rocked back and forth in place, but still, it barely moved.

When the group went back out in the fall of 2018, they were again hit with a few large storms, one of which knocked over sensors and moved a large instrument frame that housed their hydro-acoustic sensors 316 meters to the southeast, completely out of the study site.

“We had to pick that up and re-set things out in the site,” said DuVal. “When we did that, we downloaded the data and found that despite the instrument frame moving, the surrogates didn’t move. They began to bury.”

The group’s research has shown that during four months of deployments that captured six Nor’easter events, the munition surrogates they’ve put out have not moved. They’ve only scoured and buried.

“That still poses an interesting result in terms of, how do you find them when they’ve scoured and buried?” said DuVal.

In addition to the study led by Trembanis and DuVal, Jack Puleo, professor and associate chair in UD’s Department of Civil and Environmental Engineering, is conducting a similar SERDP funded study for munitions mobility in the swash zone, the zone of wave action on the beach, in sandy sites.