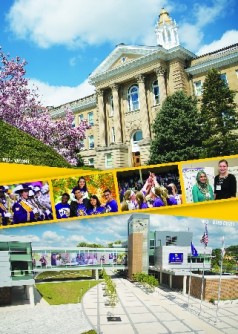 Newswise — MACOMB/MOLINE, IL -- For nearly 118 years, Western Illinois University, which started as Western Illinois State Normal School, has been a vital partner in west-central Illinois and across the globe. In spite of the ever-increasing challenges facing public higher education, Western continues to move forward to position itself for the next century and beyond.

"We are excited that a budget was passed, and we are happy to have received our first payment of $6.8 million from the state and an additional reimbursement of $5.8 million for Fall 2016 MAP funding. However, there is still much work to be done," said President Jack Thomas. "We appreciate the sacrifices that all of our WIU employees have made and continue to make to ensure a quality and affordable academic experience for our students.

"We must continue to join together to advance our University for a successful future and to rectify the crisis of confidence in our state. Now is the time to move Western Illinois University forward, but this will not happen overnight. It will take all of us working side-by-side as a collective unit," Thomas added.

Because of the decreases throughout the years in state-supported funding, fiscally conservative practices were put into place some years ago to ensure Western's sustainability, noted WIU Board of Trustees Chair Cathy Early.

"With state support diminishing over the years, even before the budget stalemate occurred, the University was conserving resources," Early said. "University officials and trustees were placed in a position that required difficult decisions to be made, and we recognize the shared sacrifices our WIU community has made. We did not want the burden of decreasing state funding to be placed upon the shoulders of our students. Restructuring the way we do business has not been an easy task, but it has been necessary to continue the day-to-day operations of the University, number one of which is to provide the resources and programs our students need and deserve."

While many other universities were raising tuition and other costs, and with the state of Illinois' failure to provide Monetary Award Program (MAP) funding, Western determined the best course of action to benefit its students was to decrease tuition by three percent for 2016-2017 and to keep the 2017-2018 rate the same as last year's tuition. In addition, the University provided MAP funding of nearly $5.1 million each semester for approximately 2,100 students during the past two academic years.

Following an almost three-year budget impasse at the state level, the Illinois General Assembly passed a state budget on July 7, 2017, which includes appropriated funding for Western and public higher education.

A look at state appropriations for the University demonstrates the need to further position Western to manage fluctuations in state support and revenue.

"While the state has passed an appropriated budget for higher education, this does not mean we have the cash in hand for fiscal years 2017 and 2018. We are confident that payments from the state will occur. However, these payments will take time, and we anticipate that the state will arrange a schedule for when funds will be released. We will continue to work with our legislative leaders and partners in education to ensure timely allocations and a fair and adequate budget for WIU and public higher education," Thomas added. "There must be predictable funding for public higher education, so we can continue our longstanding mission and tradition of educating the citizens of this state and beyond. Higher education is essential to the state's economic growth and stability."

"In all of my 30 years in higher education, I have never experienced such unprecedented budgetary times as we faced in the past decade," Thomas said. "The budget crisis has created real and personal consequences for the University."

In addition, 113 Civil Service employees received initial layoff notices in March 2016, with an effective layoff date of April 1, while 23 non-tenured faculty received layoff notices. Approximately 85 Civil Service personnel and nine faculty were called back, returning to work prior to the start of the Fall 2017 semester. Recently, Unit B (non-tenured) faculty contracts were delayed as a result of the budget impasse. With the recent passage of the state appropriated budget, 112 Unit B (non-tenured) faculty contracts were renewed for 2017-2018.

Other cost-saving measures that occurred as a result of the impasse included various constituency groups agreeing to defer salary increases, department mergers, utilization of reserve funding to meet day-to-day operational expenses and select administrative contracts moving from 12- to 11- and 10-months.

"We have persevered because of the strength and sacrifices of our people," Thomas noted.

According to Vice President for Administrative Services and Budget Director Matt Bierman, these measures have helped the University adjust to the new fiscal realities imposed by the state and the adverse impact of uncertainty on potential students and employees.

"The University continues to be fiscally conservative in order to restructure and build a foundation for future growth," Bierman added. "It is vital that all members of the University work together to overcome the challenges caused by the long-term impasse and declining revenue."

Behind the numbers, figures and statistics are the partnerships, stories and faces reflecting the impact of this public, four-year University. When looking at dollars and cents, Western's economic impact within a 16-county region in West Central Illinois is approximately $473 million.

"WIU was one of the main reasons I moved to Macomb 25 years ago. I relocated here from Missouri because I wanted to be in a college town," Mabrey said. "WIU means a lot to my business, and I wouldn't be here without Western. The University really adds to the quality of life in the region."

Macomb Mayor Mike Inman has been quoted many times as stating: "So goes Western, so goes Macomb." Inman noted that the institution is critical to the economy of not only Macomb, but to the greater region.

"But the University also provides so much more than just a monetary impact. Without a doubt, the culture of Macomb is enhanced by the diversity the student population brings," Inman said. "The community is exposed to cultural, athletic and educational events that a town the size of Macomb would never have access to. Macomb wouldn't be the wonderful place it is if not for WIU."

Since the University first opened its doors on Sept. 23, 1902, the University has contributed culturally, economically and many more ways to the regions it serves.

"When the state's legislative leaders voted in 1899 to establish Western Illinois State Normal School, they charted the course to build Macomb into an economic engine for this region," noted Thomas. "While the institution's monetary contributions are significant to McDonough County and beyond, we provide so much more, and our communities support us as well. We are proud to be a part of the Macomb and Quad Cities communities, and to provide outstanding opportunities to the regions we serve."

Reinvesting for the Future

While the past few years have been difficult, Western has continued to have a goal-minded focus.

"In spite of these challenges that placed roadblocks in our path, Western Illinois University moved those roadblocks aside and is moving forward," Thomas said. "We are positioning our University for a strong, sustainable and viable future."

According to Thomas, to move the University ahead and position the institution for the future, changes must take place. Through the President's Executive Institute and the University's Strategic Plan, numerous reinvestment plans are underway. For detailed information on the initiatives, visit wiu.edu/university_planning/strategicplan.php. Some of the initiatives include:

• Investing in high-growth and demand programs such as the Centennial Honors College, distance/online learning, select academic programs, among others.

• Expanding educational opportunities, including new and enhanced academic degree programs, to meet the needs of students and the region.

"The state of Illinois has not provided sufficient, reliable and predictable financial support. We must become more innovative and creative to build a more self-sufficient institution," Thomas said.

Thomas and other University officials have also held economic development and education summits across the state and in Missouri for community leaders, K-12 educators, community college officials and WIU alumni to obtain feedback and suggestions to further enhance the University's operations.

"We appreciate the participation we have had at these events as they provide yet another opportunity for us to better meet the needs of the regions we serve and to showcase to individuals outside of the University the many outstanding things happening at Western," Thomas added.

Western Illinois University continues to achieve excellence and be recognized for its noteworthy programs, resources and faculty and student accomplishments.

• Student Achievements:
- Junior psychology major Cheri Newell was accepted into the 2017 Summer Workshop in Cognitive and Brain Sciences, also known as "Brain Camp." Newell was one of only 15 students chosen for the camp from more than 500 applicants nationwide.

- For the second year, broadcasting major Redrick Terry was honored with the Best Video Play-By-Play Award by the National Broadcasting System.

- Research by Paris Hamm, a biology master's degree student, who graduated in Spring 2017, in collaboration with WIU faculty, was published in the journal of the American Society of Microbiology for her groundbreaking research with bats.

- The student-produced television newscast, "Live at Four," was named the top newscast in the nation at the 77th annual
Intercollegiate Broadcasting System's Awards.

- WIU's Society for Human Resource Management (SHRM) student chapters on the Macomb and Quad Cities campuses both received 2016-17 awards from the national chapter of SHRM for providing superior growth and development opportunities to student chapter members.

- School of Agriculture Director Andy Baker has been named the recipient of the 2017 Illinois Teacher Mentor award.

Working Together for a Stronger Western

"I am excited about the future of Western Illinois University. We have phenomenal students, faculty and staff, and I am positive we are going to continue to do wonderful things together," said Liberal Arts and Sciences Professor Lori Baker-Sperry.

"I work with outstanding faculty colleagues at Western, and we will continue our commitment to quality teaching, innovative research and engaging and guiding future generations of WIU students so that they can make their mark in the world," added Geography Professor and 2017 Distinguished Faculty Lecturer Chris Sutton.

From the front lines of the classrooms, residence halls and service units to the behind-the-scenes work of staff and countless others, the employees at Western are here for the students.

"Our faculty and staff, and of course, our students, make this University the great place that it is and will continue to be," Thomas added. "It is because of the people here that Western Illinois University will survive and thrive for many years to come. People believe in our University, and we will not let them down."