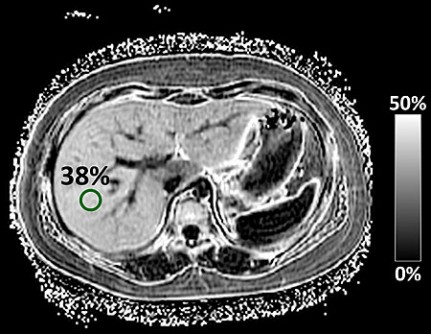 MRI of child's liver with severe NAFLD - 38 percent is fat whereas 1 percent is normal.

Newswise — Between 5 and 8 million children in the United States have nonalcoholic fatty liver disease (NAFLD), yet most cases go undiagnosed. To help address this issue, researchers at UC San Diego School of Medicine have developed a new magnetic resonance imaging (MRI)-based technique to help clinicians and researchers better detect and evaluate NAFLD in children. The study is published Feb. 5 in Hepatology.

“Currently, diagnosis of NAFLD requires a liver biopsy, which is not always available or performed. This leads to both misdiagnosis and missed diagnoses, hampering patient care and progress in clinical research,” said Jeffrey B. Schwimmer, MD, professor of clinical pediatrics at UC San Diego, director of the Fatty Liver Clinic at Rady Children’s Hospital-San Diego and the first author of the study. “Thus, a noninvasive method for diagnosing and/or evaluating NAFLD has the potential to impact millions of children.”

NAFLD is characterized by large droplets of fat in at least five percent of a child’s liver cells. Obesity and diabetes are risk factors for NAFLD. Doctors are concerned about NAFLD in children because it can lead to hepatitis, liver scarring, cirrhosis and liver cancer.

Traditionally, NAFLD is diagnosed by a gastroenterologist in consultation with a pathologist, who examines the patient’s biopsied liver tissue under a microscope. The presence and severity of liver fat is graded by the pathologist as none, mild, moderate or severe, based on the percentage of liver cells that contain fat droplets.

In an effort known as the MRI Rosetta Stone Project, Schwimmer and colleagues used a special MRI technique known as magnitude-based MRI, which was previously developed by researchers in the UC San Diego Liver Imaging Group, to estimate liver proton density fat fraction (PDFF), a biomarker of liver fat content.

“Existing techniques for measuring liver fat are dependent upon the individual scanner and the center at which the measurements were made, so they cannot be compared directly,” said Claude B. Sirlin, MD, professor of radiology at UC San Diego and senior author of the study. “By comparison, PDFF is a standardized marker that is reproducible on different scanners and at different imaging centers. Thus, the results of the current study can be generalized to the broader population.”

The team found a strong correlation between the amount of liver fat as measured by the new MRI technique and the grade of liver fat determined by pathology. This is an important step towards being able to use this technology for patients. Notably, the correlation was influenced by both the patient’s gender and the amount of scar tissue in the liver. The correlation between the two techniques was strongest in females and in children with minimal scar tissue.

Depending on how the new MRI technology is used, it could correctly classify between 65 and 90 percent of children as having or not having fatty liver tissue.

“Advanced magnitude MRI can be used to estimate PDFF in children, which correlates well with standard analysis of liver biopsies,” Schwimmer said. “We are especially excited about the promise of the technology for following children with NAFLD over time. However, further refinements will be needed before this or any other MRI technique can be used to diagnose NAFLD in an individual child.”