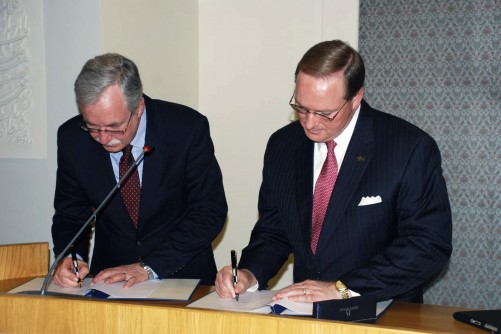 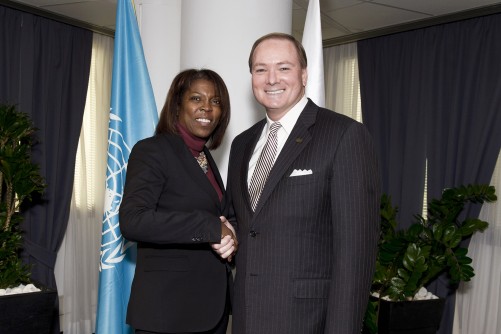 Newswise — ROME, Italy —During meetings this week in Rome, Mississippi State University officials formally broadened a 2010 agreement to work together with the United Nation’s Food and Agriculture Organization (FAO) on initiatives to address world hunger and poverty.MSU President Mark E. Keenum and FAO Deputy Director General Daniel Gustafson signed a memorandum of understanding that expands the 2010 foundation for collaborations focusing most immediately on aquatic animal health, disease prevention and emergency diagnostics, and FAO recognition of MSU as a Center for Knowledge for Aquatic Health.

The MOU makes MSU a member of the Global Aquaculture Advancement Partnership and will engage MSU’s existing facilities and expertise in aquatic animal disease diagnostics and management to expand the work of FAO’s Emergency Prevention System (EMPRES). It is a component of FAO’s Food Chain Crisis Management Framework to prevent food chain emergencies, and to promote effective containment and management of the most serious epidemic pests and diseases and food safety threats through international cooperation.The agreement between MSU and FAO in 2010 centered on food safety and nutrition. Other areas addressed in the original agreement include agriculture, poverty issues relating to children, and environmental sustainability.

Keenum’s signature on the new memorandum comes after years of dialogue between MSU and the FAO that began when he visited with agency representatives in Rome in 2010. The partnership was enhanced further when Shaw and Bohach later met with FAO officials in Washington, D.C. As a result, Gustafson visited MSU’s Starkville campus late in 2010 to learn more about the university’s research and service capabilities.

“As a land-grant institution, Mississippi State has a distinguished history of research and education to advance global development,” Keenum said. “We are well positioned to be in the forefront of developments that can reduce hunger and help other nations improve the response to needs within their own borders. This expanded agreement with FAO is another significant step forward in that process,” he said.

The U.N. established the FAO in 1945 to raise levels of nutrition and standards of living for all people in FAO member countries; to secure improvements in the efficiency of production and distribution of food and agricultural products; and to contribute toward expanding the world economy and ensuring humanity’s freedom from hunger.

“Our food science, nutrition, and health promotion department has led the effort on this project,” Keenum said. “One challenge in addressing world hunger is to find nutritious, inexpensive food products that don’t require water and can serve a range of ages, from children to adults. Mississippi State has much expertise it could bring to bear that would benefit not only the efforts in other countries, but in our own.”

During the MSU partnership dialogues with FAO, Keenum made a formal academic presentation to the U.N. group entitled: “U.S. Land-Grant Universities in the Fight Against World Hunger.”

While in Rome, Keenum also met with Ertharin Cousin, executive director of the United Nations World Food Program (WFP) and deputy executive director Amir Mahmoud Abdulla. Part of the United Nations System, the WFP has a special mission of responding to civil conflict, natural disasters and other emergency situations. It is the world's largest humanitarian agency fighting worldwide hunger. “The organization's work is significant, because WFP estimates that a third of all deaths in children under the age of 5 in developing countries are linked to malnutrition,” Keenum said.

He also met with David Lane, U.S. ambassador to the U.N. Agencies for Food and Agriculture. Before becoming MSU’s chief executive in 2009, Keenum was Under Secretary in the U.S. Department of Agriculture. He also holds degrees in agricultural economics from the 135-year-old land-grant institution. “One focus of Mississippi State’s land-grant mission is to apply knowledge that can improve lives,” he observed. “I’m delighted to be able to share some of these capabilities with an organization that serves 70 percent of the world's hungry people.”

While in Rome, Keenum and the MSU delegation also visited the MSU College of Art, Architecture and Design’s Rome Semester program at the University of Arkansas Rome Center, where MSU has a study abroad agreement with UARC for MSU architecture majors.For more information on Mississippi State University, visit www.msstate.edu. 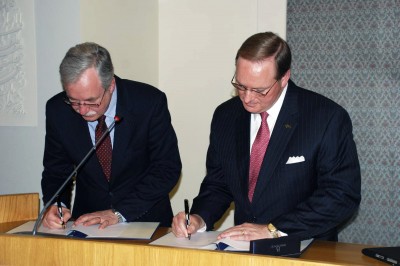 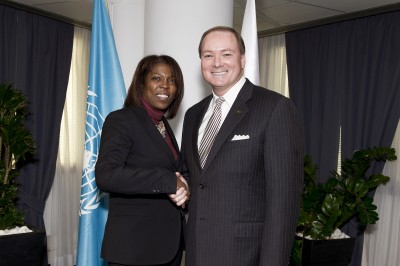