Much of Earth's nitrogen was locally sourced 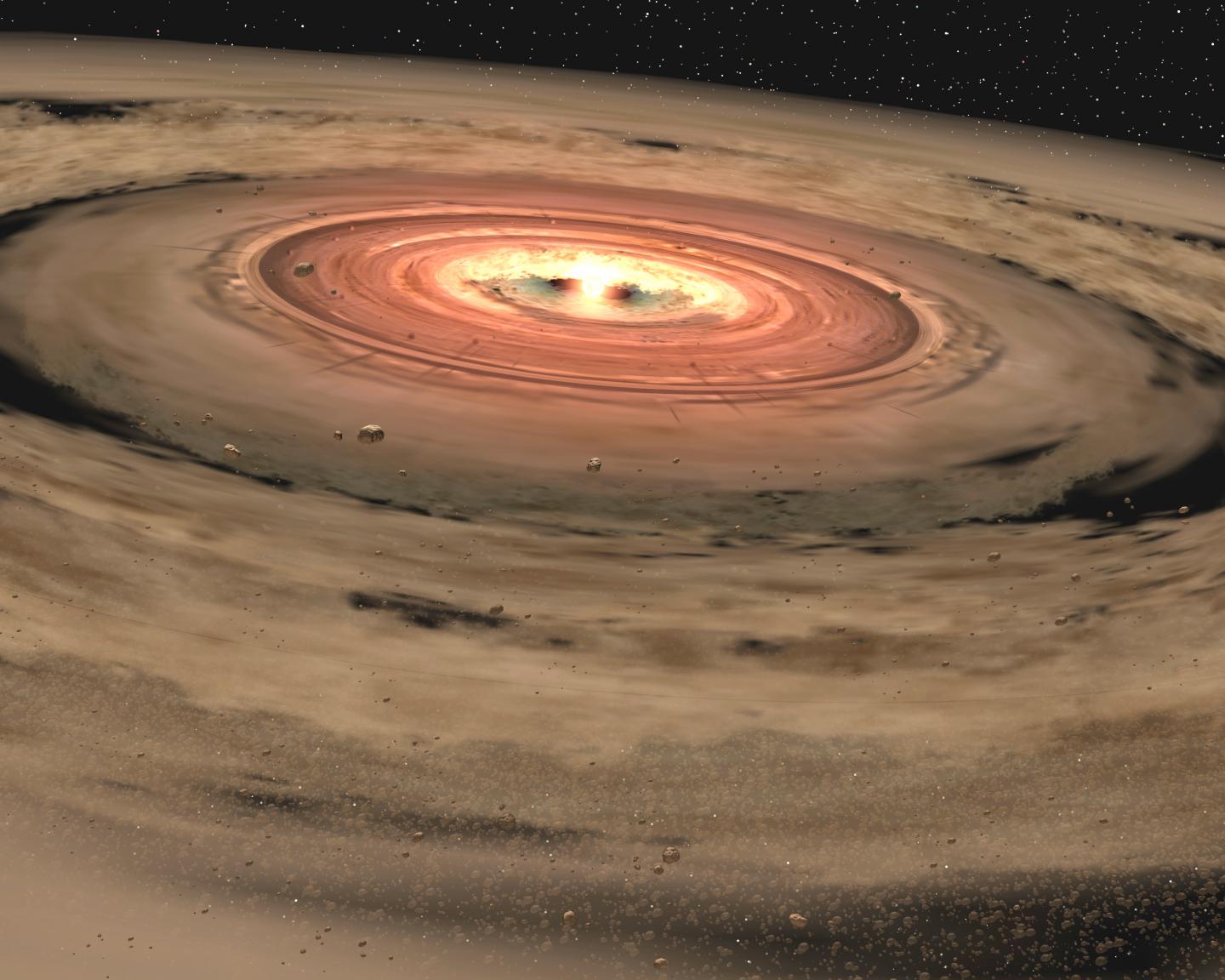 An artist's conception shows a protoplanetary disk of dust and gas around a young star. New research by Rice University shows that Earth's nitrogen came from both inner and outer regions of the disk that formed our solar system, contrary to earlier theory.

Rice University graduate student and lead author Damanveer Grewal, seated, with faculty member Rajdeep Dasgupta, conducted the study on nitrogen isotope compositions of iron meteorites to show volatile elements deposited on Earth and other rocky planets in the early solar system had more than one source. 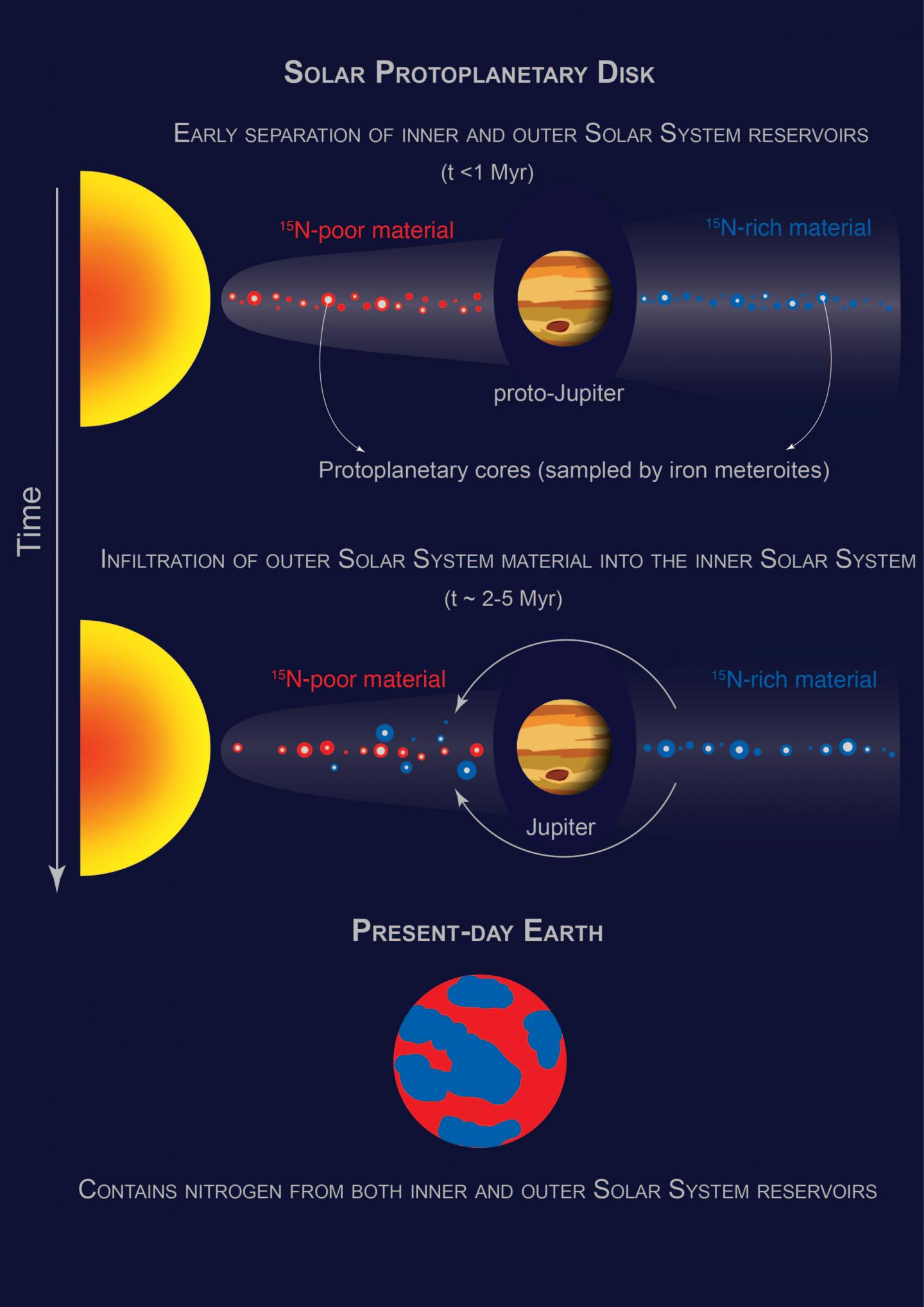 Newswise — HOUSTON - (Jan. 21, 2021) - Where did Earth's nitrogen come from? Rice University scientists show one primordial source of the indispensable building block for life was close to home.

The isotopic signatures of nitrogen in iron meteorites reveal that Earth likely gathered its nitrogen not only from the region beyond Jupiter's orbit but also from the dust in the inner protoplanetary disk.

Nitrogen is a volatile element that, like carbon, hydrogen and oxygen, makes life on Earth possible. Knowing its source offers clues to not only how rocky planets formed in the inner part of our solar system but also the dynamics of far-flung protoplanetary disks.

Their work helps settle a prolonged debate over the origin of life-essential volatile elements in Earth and other rocky bodies in the solar system.

"Researchers have always thought that the inner part of the solar system, within Jupiter's orbit, was too hot for nitrogen and other volatile elements to condense as solids, meaning that volatile elements in the inner disk were in the gas phase," Grewal said.

Because the seeds of present-day rocky planets, also known as protoplanets, grew in the inner disk by accreting locally sourced dust, he said it appeared they did not contain nitrogen or other volatiles, necessitating their delivery from the outer solar system. An earlier study by the team suggested much of this volatile-rich material came to Earth via the collision that formed the moon.

But new evidence clearly shows only some of the planet's nitrogen came from beyond Jupiter.

In recent years, scientists have analyzed nonvolatile elements in meteorites, including iron meteorites that occasionally fall to Earth, to show dust in the inner and outer solar system had completely different isotopic compositions.

"This idea of separate reservoirs had only been developed for nonvolatile elements," Grewal said. "We wanted to see if this is true for volatile elements as well. If so, it can be used to determine which reservoir the volatiles in present-day rocky planets came from."

Iron meteorites are remnants of the cores of protoplanets that formed at the same time as the seeds of present-day rocky planets, becoming the wild card the authors used to test their hypothesis.

The researchers found a distinct nitrogen isotopic signature in the dust that bathed the inner protoplanets within about 300,000 years of the formation of the solar system. All iron meteorites from the inner disk contained a lower concentration of the nitrogen-15 isotope, while those from the outer disk were rich in nitrogen-15.

This suggests that within the first few million years, the protoplanetary disk divided into two reservoirs, the outer rich in the nitrogen-15 isotope and the inner rich in nitrogen-14.

"Our work completely changes the current narrative," Grewal said. "We show that the volatile elements were present in the inner disk dust, probably in the form of refractory organics, from the very beginning. This means that contrary to current understanding, the seeds of the present-day rocky planets -- including Earth -- were not volatile-free."

Dasgupta said the finding is significant to those who study the potential habitability of exoplanets, a topic of great interest to him as principal investigator of CLEVER Planets, a NASA-funded collaborative project exploring how life-essential elements might come together on distant exoplanets.

"At least for our own planet, we now know the entire nitrogen budget does not come only from outer solar system materials," said Dasgupta, Rice's Maurice Ewing Professor of Earth, Environmental and Planetary Sciences.

"Even if other protoplanetary disks don't have the kind of giant planet migration resulting in the infiltration of volatile-rich materials from the outer zones, their inner rocky planets closer to the star could still acquire volatiles from their neighboring zones," he said.

Caption: An artist's conception shows a protoplanetary disk of dust and gas around a young star. New research by Rice University shows that Earth's nitrogen came from both inner and outer regions of the disk that formed our solar system, contrary to earlier theory.