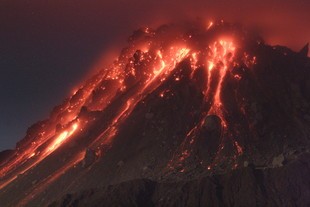 Lava pours out of Montserrat during an eruption. A University of Arkansas researcher and his colleagues have used observations to create a new model that better explains what happens beneath the volcano's surface. 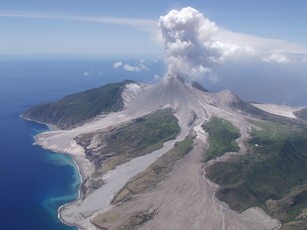 The island of Montserrat has become a living observatory for researchers who want to learn more about active volcanoes. 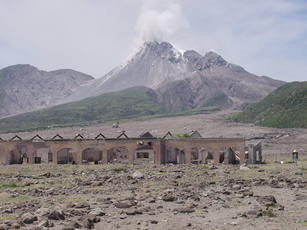 The prolonged eruption on Montserrat, which began in 1995, drove away more than half of the island's 11,000 inhabitants, killed the tourism industry and buried the airport in a pyroclastic flow.

Newswise — Discovering what happens beneath an active volcano is a job that's often too hot for researchers to handle, but a University of Arkansas scientist and his colleagues have created a new and better way to "look" at what's going on in the molten magma that lies beneath a volcano's surface. Their model not only reaches some interesting conclusions, but also allows the researchers to make a prediction as to what the system will do over time.

"Nobody has done this before," said Mattioli. "This methodology could be significant for volcanic systems elsewhere."

For the first time, researchers have linked together measurements from satellite geodetic data obtained via the global positioning system and from lava flux, which indicates the volume of material emerging from the earth's crust over time. They did so using 10 years of continuous data from the SoufriÃ¨re Hills Volcano on the island of Montserrat in the Caribbean, thanks to funding from the National Science Foundation. This meant they were able to look at three different dome-building periods and the movements and magma flow that accompanied them.

The prolonged eruption on Montserrat, which began in 1995, drove away more than half of the island's 11,000 inhabitants, killed the tourism industry and buried the airport in a pyroclastic flow. The island has become a living observatory for researchers who want to learn more about active volcanoes.

"In pauses, the deep chamber is inflating. The shallow one is not doing much of anything," said Mattioli, who teaches in the J. William Fulbright College of Arts and Sciences.

The deep chamber grows in volume when there is no flux of material to the surface, and shrinks in volume when magma emerges on the earth's surface; the upper chamber shows no such ties. This suggests that there must be some kind of valve mechanism operating between the upper and lower chambers, Mattioli said.

"We don't yet understand why this valve exists and what may control when it opens and shuts," Mattioli said. The next step will be to look for the physical mechanisms at work in the processes taking place between the chambers and the surface.

Because they have been able to examine the volcano through a decade of its eruptive cycle, the researchers were able to see volume changes in the lower magma chamber over time.

"Because we have all this data, we can make a prediction as to what is going on in the system as a function of time," Mattioli said. The data follow a decay curve that has the scientists predicting that this particular volcanic cycle is coming to an end, if the system is not reinvigorated.