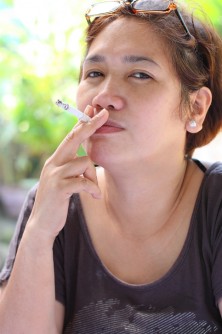 Newswise — ATS 2017, WASHINGTON, DC─Smokers with diminished chest muscle may face a greater risk of death than those smokers with more chest muscle, whether they have chronic obstructive pulmonary disease (COPD) or not, according to new research presented at the ATS 2017 International Conference.

“Prior studies found that smoking resulted in muscle damage and loss of muscle, even in so- called healthy smokers,” said lead study author Alejandro A Diaz, MD, instructor in medicine at Harvard. “But whether that loss of muscle was associated with higher death rates was not known.”

The researchers analyzed computed tomography (CT) scans from 6,971 smokers (average age 60); more than half (55 percent) had COPD. In addition to determining the extent of COPD, the scans were used to measure the chest, or pectoralis, and the muscles along the spine, or paravertebral, muscle areas (PMA and PVMA, respectively). Participants were followed for more than five years on average. During that time, 653 died.

“This is an interesting finding,” Dr. Diaz said. “In smokers with COPD, it may be that other factors—for example, oxygen use because of respiratory failure—make the contribution of muscle loss less important.”

The authors adjusted for a range of factors that influence muscle health and mortality, including age, race, smoking history, disease severity and comorbidities.

Dr. Diaz noted that while muscle mass is not routinely measured in those with COPD or those who smoke, smokers who meet certain criteria are now recommended for CT lung cancer screening.

“Pectoralis mass is easily identified on chest CT scans,” he said. “Adding this information may help clinicians identify those at greatest risk of dying from smoking.”

Low Muscle Mass and Mortality in Smokers with and Without COPD

Rationale: Loss of muscle mass is associated with increased mortality in COPD subjects. Smokers without COPD also manifest many of the same comorbid conditions as those with COPD.

Objectives: To test the hypothesis that reduced muscle mass is associated with increased mortality in smokers without COPD.

Methods: We measured both pectoralis and paravertebral erector spinae muscle area (PMA and PVMA, respectively) as well as emphysema on chest computed tomography (CT) scans from 6,971 smokers with and without COPD. The contribution of muscle mass to death risk prediction was assessed using Cox regression models, and C and net reclassification indices. PMA and PVMA were divided in quartiles with the highest used as referent.

Conclusions: Low muscle mass is associated with increased mortality in smokers with and without COPD. This simple measurement of muscle mass readily obtained from CT scans appears to improve mortality risk assessment.