5-Sep-2017 11:05 AM EDT, by Perelman School of Medicine at the University of Pennsylvania contact patient services
favorite_border 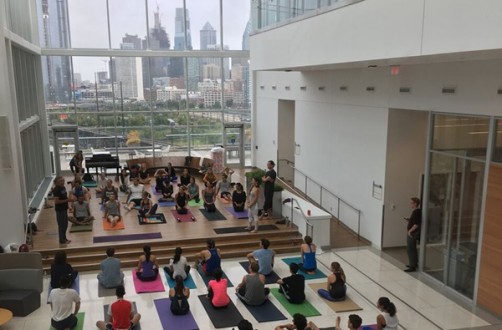 Students in the Perelman School of Medicine combine yoga with anatomy instruction to gain a better understanding of the human body.

Newswise — Take a deep breath in. As you breathe out, answer: what did your internal intercostal muscles do when you took that breath?

This isn’t a common question in most yoga classes, but it is part of Yoganatomy at the Perelman School of Medicine, a yoga class that combines traditional yoga practice with reinforcement of lessons in gross anatomy. By mindfully moving and breathing with the body parts that earlier in the day they had learned about in lectures and examined up-close in donated cadavers in the lab, first-year medical students at Penn gain a deeper appreciation of these structures in a living body.

“The primary goal of Yoganatomy is to give the students an outlet to help them with their stress,” said Nikki Robinson, the yoga instructor who developed and leads these classes, which began last fall. The demands on medical students’ time are so intense that this class offers students a way to unwind and exercise easily on the medical school campus when they otherwise might not find the time to seek that out, she said. “We bring it to them. Here's an hour when they're going to move, breathe, talk about things we learned in the anatomy lab, and then rest, so they're recharged to go about the rest of their day.”

Robinson said “things we learned in lab” for a reason — and it wasn’t just empathy with her students. Robinson was given permission to attend the gross anatomy classes alongside Penn medical students last fall.

Going All in for the Med Students

Robinson made the unusual educational twist from yoga teaching into the medical school classroom through a connection with Mitchell Lewis, DPhil, a professor of Biochemistry and Biophysics. Lewis teaches the first-year medical students intermediary metabolism with a level of dedication to education that is hard to understate. Though Lewis is a basic scientist whose professional life is in a lab, a number of years ago he took a sabbatical and audited the first-year medical school curriculum at Penn in order to get a better understanding of how his class fits into the broader preclinical curriculum. “Of all the preclinical courses, I found anatomy the most fascinating,” he said. “I visit and spend several hours in the gross labs with every new class.”

A few years ago, Lewis started attending yoga classes at the Yoga Garden, where Robinson leads classes that have a strong anatomical bent. The idea soon came to life when Lewis approached Neal Rubenstein, MD, PhD, the gross anatomy course director, about the possibility of integrating yoga with gross anatomy. Together, the three devised a plan to augment traditional medical education with anatomically based yoga. Rubenstein even suggested that Robinson attend and learn firsthand what medical students experienced in the gross labs.

“I love this, and it is really important for me to be able to accurately reflect and represent what the students are taught,” Robinson said. “If they're going to be in my care, I want to reinforce what they're learning on the table, and then take that and interpret it in an accurate way, to physically put it in their body.” This summer, Robinson completed a gross anatomy course at Rowan University, taught in part by James White, PhD, one of Penn Med’s most esteemed teachers. This fall, Robinson will assist the first-year students in gross lab and continue teaching Yoganatomy to the new crop of students.

Yoganatomy runs in many ways as a typical yoga class, except for the parts that sound more like a gross anatomy study session. When students are in plank pose — which is essentially holding the “up” position of a push-up — Robinson might say, “Now retract the scapula.” Students are forced to think about the muscles connected to the scapula and to recall the distinction between protraction and retraction.

“I try to straddle keeping it really serious and medically accurate and just giving them something fun to do,” Robinson said.

After gross anatomy and the end of the first semester, medical education with a yogic corollary isn’t over for Penn medical students.

The leader of the next yoga class in the sequence is an inversion of Robinson: instead of a yoga instructor-turned-part-time-med-school-attendee, Sila Bal is a full-time medical student who became certified as a yoga instructor. Now a fifth-year MD/MPH student at Penn, Bal incorporates her knowledge of anatomy and physiology into teaching yoga classes.

But soon after she began teaching, she got to thinking, “Wouldn’t it have been cool if when I was an MS1 or MS2, someone had gone through what is or isn’t physiologically plausible that’s taught in yoga classes?” She also thought back on the experience she had working as a research assistant on a study of yogic breathing as a tool to help patients with depression. When the paper resulting from that study was published last fall, Bal decided to connect it with the Brain and Behavior curriculum taught as part of Mod 2, a preclinical learning block focused on organ systems and disease that spans from January of medical students’ first year through December of their second year. Over the course of the last spring semester, Bal developed and taught multiple classes connected to the topics in Mod 2 and called them Medically Informed Yoga.

“I pick a paper from a reputable journal with trustworthy results and use that as a starting point for our discussions,” Bal said. In the Brain and Behavior module, “we went through depression and the physiology behind depression, the results of the paper, and physiological bases of the use of yoga in depression. Depression has a lot of research behind it. For example, we know yoga stimulates the parasympathetic nervous system.”

After a brief discussion, Bal leads the students through a 45-minute sequence of the asanas, or physical postures that yoga teachers recommend for the organ system under discussion, to practice what they learned. Bal points out that in some organ systems, the connection with these asanas has not necessarily been demonstrated through medical research, but often yogic knowledge, honed through thousands of years of practice and experience, reflects a different type of “evidence through the ages.”

Bal and Robinson are working together to develop a coordinated curriculum of yoga classes to complement the full span of the three semesters of preclinical medical education that can be standardized and repeated in future years.

Already this year, yoga as a study enhancement is front and center for new students. During their orientation to medical school this month, new first-year students received an introduction to Yoganatomy and Medically Informed Yoga, and participated in a brief demo. Bal, Lewis, and Robinson believe that all medical students can benefit from yoga through integrating stress relief, exercise, and connection into their often high-stress learning experience.

“I encouraged all of the students in my biochemistry class to participate in Yogantaomy,” Lewis said. “This past year our Yoganatomy attracted many medical students that have never been exposed to yoga.”

“Attendance was highest last fall at the sessions when Lewis participated,” Robinson said. “The students wanted to see their professor’s moves, including an impressive handstand.” The sessions also lured more senior medical students — some of whom said that Robinson’s Yoganatomy quizzes helped them study for board exams. Yoganatomy also attracted faculty and graduate students from other schools at Penn.

“This year we hope to encourage more medical faculty to participate in Yoganatomy,” Lewis said.

“We are open to any and everyone who wants to join,” Bal added.