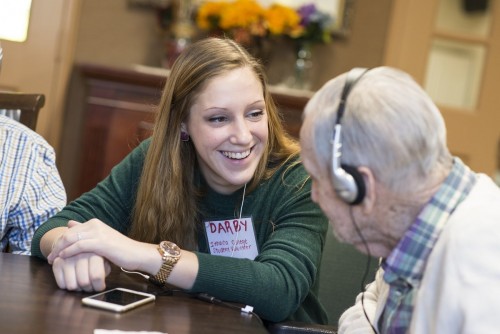 Music and voice major Jessica Voutsinas ’18 was singing the classic song “Over the Rainbow” to a resident at Longview — an adult residential facility near the Ithaca College campus — when the woman unexpectedly lit up and began telling stories about her life and children in a breakthrough of memory recall.

Voutsinas started visiting Longview as part of a new course at Ithaca College called Exploring Music as Medicine, which teaches students how to perform for dementia and Alzheimer’s patients and then assigns them to local nursing homes to bring music to residents. Since the launch of the program, dozens of patients in Tompkins County have experienced its benefits.

“You play familiar music,” lecturer and course cofounder Jayne Demakos ’78 says. “That’s really what people with Alzheimer’s and dementia will respond to.”

“The class was a transformative experience for me,” says Voutsinas. “It seemed unbelievable that music could do something that pills can’t. But after witnessing this and experiencing it for myself, my whole perception of music changed.”

Ryan Mewhorter ’19, a voice and performance major, was introduced to the idea of the healing power of music when he heard School of Music Dean Karl Paulnack speak about the program at the beginning of his first year at IC.

Having lost his grandfather to Alzheimer’s disease, Mewhorter immediately wanted to become involved in the project. By his second semester on campus, he had founded a student organization called Healing through Musical Companionship. The club now has 50 members who visit Beechtree Center for Rehabilitation and Nursing in downtown Ithaca each week to play recorded music for patients. Using recorded music allows students who are not musicians to help trigger residents’ memories and encourage positive emotional responses.

During her first visit to Beechtree in February 2016, club member Kathryn Kandra ’19 met a woman who was slumped in her wheelchair, head tucked down toward her lap. Kandra began playing the show Annie on an iPod, and within minutes the woman started singing along and conducting the music. Halfway through act one, she began asking Kandra about her life at Ithaca College.

“When I met her, she was completely nonverbal,” Kandra says. “It was amazing that I could give her at least 10 minutes of this lucidness and companionship.”

Mewhorter also loves bringing that feeling to Alzheimer’s and dementia patients, although he found that the live music program through the music course allowed him to make a more direct connection with residents.

“Live music has this feeling that is more personal,” he says. “When you put headphones on a resident, there isn’t a whole lot of room to communicate. When you perform music for them, they can sing along and make eye contact with you and follow the beat.”

Seeing the incredible enthusiasm for both the Exploring Music as Medicine course and Healing through Musical Companionship club has sparked talk of expanding the programs. Paulnack says it is possible that the School of Music may consider creating a major or minor in music as medicine that would emphasize both a high level of musicianship and the healing power of music. The program would involve the departments of music, recreation and leisure studies, gerontology, speech-language pathology and audiology, occupational therapy, and writing.

“We don’t claim to know what we’re doing yet,” says Paulnack. “We just want to jump in with both feet and explore it.”