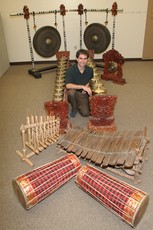 Michael B. Bakan, an associate professor of ethnomusicology at Florida State University's College of Music and the director of the Music-Play Project for children with autism spectrum disorders, sits among instruments in the "E-WoMP" (exploratory world-music playground).

Newswise — In a room dubbed the E-WoMP (exploratory world-music playground) that serves as the centerpiece of the Music-Play Project housed at Florida State University's College of Music, children with autism spectrum disorders (ASD) are making impressive gains in creativity, emotional regulation and social participation.

FSU ethnomusicologist Michael B. Bakan likes to call such gains "response-ability." He's the director of the innovative medical ethnomusicology program, which uses an array of unusual musical instruments from around the world for improvisational music-play activities that help create a unique therapeutic environment.

"Our program emphasizes ability and personhood over disability and 'treatment' and accepts that there are different ways of interacting, just as there are different ways of making music in different cultures," said Bakan, an associate professor in the College of Music. "The Music-Play Project fosters the growth of response-ability, and in turn, happiness, because it gives children the chance to contribute to the co-creation of culture who too often are characterized as being incapable of doing so."

Bakan and FSU colleague Benjamin Koen, an assistant professor of ethnomusicology, developed, launched and now oversee the interdisciplinary project in collaboration with researchers at the university's Center for Autism and Related Disabilities and College of Medicine.

The Music-Play Project welcomes children three at a time to the E-WoMP, where they can choose from among safety-modified world-music options such as Balinese gamelan instruments, a West Javanese angklung (tuned bamboo-tubes rattle), and a West African gyil (xylophone), among many others. Less exotic choices might include homemade shakers, small cymbals and slide-whistles. Soft, colorful rubber swimming-pool dive sticks are used as mallets. Bakan describes all the instruments as "high yield for low input" because they yield satisfying sounds with minimal effort and require little or no technical competence.

Children can freely explore the creative and social possibilities in the E-WoMP on their own terms or with one another, the parent accompanying them, or Bakan and Koen, who as expert improvisers trained in diverse world music traditions, serve as music-play facilitators.

"By supporting a child's expression and creativity, following instead of leading, responding rather than directing, and integrating instead of teaching, our approach helps children on the autism spectrum in ways that more directive, skills development-based interventions, music-related or otherwise, may not," Bakan said.

Participants in the Music-Play Project are first evaluated and then referred to the program by the FSU Center for Autism and Related Disabilities. To date, there have been three, six-week programs of weekly, hour-long sessions, which Bakan and colleagues aim to further develop and eventually expand.

For a comprehensive overview of the Music-Play Project there's "Following Frank: Response-Ability and the Co-Creation of Culture in a Medical Ethnomusicology Program for Children on the Autism Spectrum," a paper that is published in the current (Spring/Summer 2008) edition of the prestigious scholarly journal Ethnomusicology. Bakan was the lead author.

"Following Frank" also describes a 2006 study of the Music-Play Project that focused on a memorable six-year-old participant called "Frank" (not his real name), whose autism-related challenges were profound and pervasive compared to those of most of his music-play peers. Even so, Bakan observed remarkable, positive changes in the child's response-ability during E-WoMP sessions that also were evident in his social interactions at home.

"The medium of free music-play can help children with ASD to gain confidence and self-esteem, and we are seeing this bear fruit not just in the E-WoMP but also at home, at school and in peer relationships," Bakan said. "Both in what it achieves and what it reveals about what is already there, the Music-Play Project at FSU is providing a lens through which others can view these children as creative and social makers of culture."

The Centers for Disease Control and Prevention estimate that one in 150 U.S. children is affected by ASD, which encompasses a wide range of developmental challenges of varying degrees in verbal and non-verbal communication and social interaction.