MyChart Use Skyrocketing Among Cancer Patients 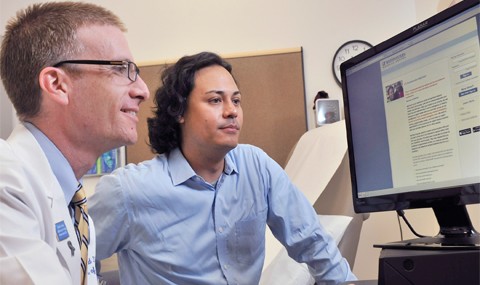 Newswise — DALLAS – July 9, 2014 – There has been a sharp increase in the number of cancer patients at UT Southwestern Medical Center using MyChart, the online, interactive service that allows patients to view laboratory and radiology results, communicate with their healthcare providers, schedule appointments, and renew prescriptions.

“This pattern suggests that not only are far more patients using this technology, but also that they are using it more intensively,” Dr. Gerber said.

These findings, published in the Journal of Oncology Practice, are noteworthy because no prior study has systematically examined the use of electronic patient portals by patients with cancer, even though use of this technology is surging nationwide, creating new terrain in clinical care and doctor-patient relationships.

The increase in MyChart use reflects the convenience and ease of use perceived by patients.

Darla Robinson, a 75-year-old Arlington resident with lung cancer, said she uses MyChart to follow up on her appointments with Dr. Gerber and other UT Southwestern doctors. Her husband, Jim, navigates the MyChart pages and types in any messages she wants to send to her caregivers.

“It’s very efficient for finding your appointments and any information about your tests after you see the doctor,” she said. “It’s no hassle. It’s user friendly.”

In 2009, Congress allotted $27 billion to support the adoption of Electronic Medical Records. The Department of Health and Human Services began allocating the funding in 2011. UT Southwestern started offering these services years earlier.

“UT Southwestern made MyChart available for cancer patients in 2007 and, wow, do they use it. Many patients use it, and they use it frequently, with the majority of those patients being over 60,” said Dr. Lee, pointing out that those patients are different from the non-patient demographic, typically younger that uses the internet more heavily than the rest of the general population.

Dr. Lee, a medical anthropologist, said he will use the study as a baseline to inform his efforts to learn more about how doctor-patient relationships may be changed through increased “meaningful use” of health care technologies, such as the Electronic Medical Record.

Nearly 6,500 patients at the Harold C. Simmons Comprehensive Cancer Center enrolled in MyChart from 2007 to 2012 and were included in the study.

“I was struck by the immediacy of the uptake and the volume of use,” Dr. Gerber said. “I suspected that the volume would be high. I did not think that it was going to be multi-fold higher than other patient populations.”

Use of MyChart was greater among cancer patients than among another other patient groups except for children with life threatening medical conditions, according to the study.

“We undertook this study because we suspected that the volume of electronic portal use might be greater among patients with cancer than in other populations,” Dr. Gerber said.

While the study did not directly compare use patterns with non-cancer groups, the average use in the current study was four to eight times greater than has been reported previously in primary care, pediatric, surgical subspecialty, and other populations.

Dr. Gerber explained that patient use of electronic portals to receive and convey information may have particular implications in cancer care. Laboratory and radiology results may be more likely to represent significant clinical findings, such as disease progression.

“I think we are still learning how patients understand and use the complex medical data, such as scan reports, that they increasingly receive first-hand electronically,” Dr. Gerber said.

Furthermore, symptoms reported by patients with cancer may be more likely to represent medical urgencies. Notably, the study found that 30 percent of medical advice requests from patients were sent after clinic hours.

The Harold C. Simmons Cancer Center is the only National Cancer Institute-designated cancer center in North Texas and one of just 66 cancer centers in the nation designated by the National Cancer Institute. The center brings innovative cancer care to the region, while fostering groundbreaking basic research that has the potential to improve patient care and prevention of cancer worldwide.