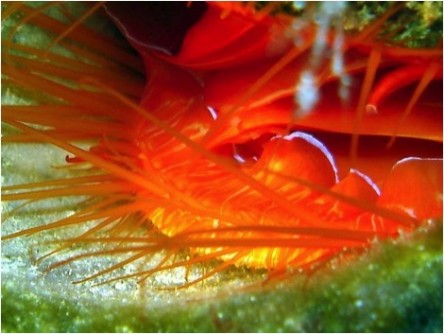 The ‘disco’ clam Ctenoides ales sends ripples of light along the edge of its mantle to produce a flashing display, but why? 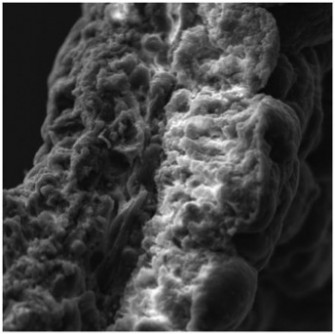 Scanning electron microscope image of the tissue of a ‘disco’ clam, showing white reflective tissue on the right, and red absorbent tissue on the left.

2015 annual conference of the Society of Integrative and Comparative Biology

Newswise — In the dark, underwater caves of the Indo-Pacific Ocean, a lucky diver may be treated to a rare underwater light show: the flashing of the clam Ctenoides ales, also known as the ‘disco’ clam. How and why these invertebrates produce their spectacular display is a mystery. New research by Lindsey Dougherty of the University of California, Berkeley, suggests that scaring off predators or luring prey may be the primary motivations for the disco clam’s flashy behavior.

Dougherty first became fascinated with disco clams when she was shocked by their display during a dive in Indonesia. “It was on that trip I first saw the disco clam, and immediately fell in love,” reminisced Dougherty.

Upon her return, Dougherty was surprised to discover that despite their attention-grabbing behavior, it was not known why the flashing is produced. She and her collaborators, Professor Roy Caldwell and undergraduate Alexandria Neibergall, set out to investigate.

The disco clam is an active, filter-feeding mollusk that lives in crevices or small caves in Indo-Pacific coral reefs. Their flashing is so bright that it had been thought to be the result of bioluminescence, the production of light within the tissue. But deeper investigation has revealed a much more unique mechanism behind the displays.

Using high-powered transmission electron microscopy, Dougherty discovered that the flashes are caused by specialized tissues that form a double layer, reflective to light on one side, but absorbent on the other. When the tissue is rapidly rolled and unfurled by the clam, the reflecting light gives the appearance of flashing. These tissues are so reflective that they can even flash using the low levels of blue light found in the caves. They are the only species of bivalve to have evolved structural coloration of this kind, and this latest project set out to discover why.

Dougherty and colleagues had three hypotheses about why the clams flash: to attract a mate, to scare off predators, or to attract prey. They tested these hypotheses using experiments on live clams in the lab. They wanted to know: can the clams see each other? Do they respond with flashing to other clams, predators, or prey?

They examined the structure and proteins in the clam’s tiny eyes using a powerful microscope and concluded that its vision is likely too poor to allow it to observe displays by other clams. This suggests that the clams are not visually attracted to one another, and that the flashing is most likely used for repelling or attracting other species.

Next, they tested the effect of the flashing on predators, which in the wild might be octopi, predatory snails, or mantis shrimp. For this study, they conducted ‘looming’ trials, during which the researchers moved a false predator in the direction of the clams, and gauged their reactions. “In this case, the false predator was just a styrofoam lid. But it turns out a styrofoam lid is indeed pretty scary to the clams, because their flash rate almost doubled from just under 2 Hz to just under 4 Hz,” said Dougherty.

Intriguingly, the researchers also found high levels of sulphur, the key ingredient in sulphuric acid, in the clam’s tentacles. Additionally, a peacock mantis shrimp that was attacking the disco clam seemed to recoil from its tentacles and enter a catatonic state. This preliminary information suggested to Dougherty that the clams may be producing noxious, acidic mucus to repel predators.

Finally, phytoplankton prey were introduced into the tank. As the clam’s tentacles began to sense the presence of prey, their flash rate increased significantly. Many species of plankton are indeed phototaxic and therefore attracted to light, though it is unclear whether the disco clam’s prey species are able to see their flashing, a topic of a future field study.

Working with these clams in the wild, despite their visual appeal, also has its drawbacks. “Doing an experiment is one thing, but doing an experiment underwater, even a simple one, is exponentially more difficult,” Dougherty explains. “Coral reefs are fragile environments; you have to be very conscious of what you are doing.”

Then there are the technical issues: “Even once you do get the camera set up, I’ve had hermit crabs walk over and run into the GoPro camera and knock it over. Every day is an adventure with underwater research!”

Dougherty presented this research at the 2015 annual conference of the Society of Integrative and Comparative Biology in West Palm Beach, Florida. Video of the disco clam can be found at: https://www.youtube.com/watch?v=D_siqfXOSaA&feature=youtu.be