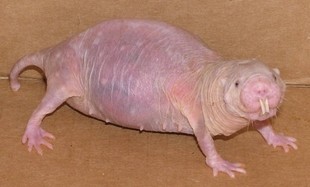 Reproductive function does not appear to decline with age. This pregnant naked mole-rat is 15 years old.

Newswise — The long-lived naked mole-rat shows much higher levels of oxidative stress and damage and less robust repair mechanisms than the short-lived mouse, findings that could change the oxidative stress theory of aging.

The new study comparing the naked mole-rat, which has a life span of 28 years, and the mouse, which has a lifespan of three years, will be presented Oct. 8 at The American Physiological Society conference, Comparative Physiology 2006: Integrating Diversity. The results fly in the face of the oxidative stress theory of aging, which holds that damage caused by oxidative stress is a significant contributor to the aging process.

Under this theory, naked mole-rats should be better at preventing or repairing oxidative stress than their much shorter-lived cousin, the mouse. The study, "High oxidative damage levels in the longest-living rodent, the naked mole-rat," was done by Blazej Andziak and Rochelle Buffenstein, of The City College of New York, Timothy P. O'Connor, of Weill Medical College of Cornell University, and Asish P. Chaudhiri and Holly Van Remmen of the University of Texas Health Science Center, San Antonio. The study was presented during a poster session on October 8.

Don't toss the oxidative stress theory of aging out the window just yet, but prepare to modify it, said Buffenstein, the senior author. Her team suspects that the naked mole-rat's longevity stems from its ability to defend against acute bouts of oxidative stress. That is, the kind of oxidation that happens because of an unusual occurrence rather than the kind that happens as a result of normal aerobic respiration.

For example, when hydrogen peroxide is added to a culture containing naked mole-rat fibroblast cells, they remain viable and appear to repair the acute damage more rapidly than shorter-lived animals, explained Buffenstein.

What is old age?

We know that all organisms age and die. It's such an inevitable course of events that most of us spend more time thinking about how to hide the wrinkles and gray hair than we do about what our cells are actually doing to usher us to the end. Physiologists are looking at molecules and cells to understand this process.

One way to look at aging is to compare closely related organisms with different life spans. That's why it made sense to compare mole-rats and mice: They're the same size and they're rodents, but the mole-rat lives to 28 years, about nine-times longer than the mouse.

"Mole-rats must have something happening at the biochemical level to allow them to do this," said Andziak, the study's lead author. Specifically, he wanted to see if oxidative stress could explain the difference.

The study compared two-year-old naked mole-rats to four-month-old mice. The researchers chose those ages so that the animals would be equivalent ages relative to their maximum lifespans, Andziak said.

When the researchers measured this ratio in the liver, they found that the opposite was true. Mole-rats had less reduced glutathione and thus a lower ratio, indicating the mole-rat experienced much more oxidative stress. These results fit with the findings of a previous study in which Andziak found that naked mole-rats did not have superior antioxidant capacity when compared to mice. Mole-rats had much lower activity of the ubiquitous antioxidant enzyme, cellular glutathione peroxidase.

The researchers next looked at how much damage the oxidation had caused. It is possible, they reasoned, that the mole-rat suffers greater oxidative stress, but its physiology had somehow prevented damage from occurring.

The researchers measured oxidative damage in lipids, DNA and proteins and found that naked mole-rats showed much greater levels of damage to each of these biological molecules, in all tissues assayed, when compared to mice. The study found multiple signs of lipid damage: The level of isoprostanes found in the urine was 10 times higher in the naked mole-rat, the level of malondialdehyde in liver tissue was twice as high and isoprostane levels in heart tissue was two-and-a-half times the level of the mice.

"All of the classical measures of oxidative stress are higher in the mole-rat," Andziak concluded. "Given that naked mole-rats live an order of magnitude longer than predicted based on their body size, our findings strongly suggest that mechanisms other than attenuated oxidative stress may explain the impressive longevity of this species."

The next step is to determine how the mole-rats manage to live with the damage caused by oxidative stress. Buffenstein said she suspects that the mole-rat is able to fend off the occasional oxidative insult that can occur, and that may be more important than what happens with the steady-state levels of oxidative stress that result from normal metabolic activity.

Buffenstein theorizes that the naked mole-rats in her laboratory suffer higher levels of oxidative stress than they would in their natural underground habitat, where they encounter much lower levels of oxygen. But this exposure at an early age may provide some protection against acute oxidative stress and may be of considerable importance in their resistance to bursts oxidative stressors throughout their lives, she said.

"The naked mole-rat, with its surprisingly long lifespan and remarkably delayed aging, seems like the perfect model to provide answers about how we age and how to retard the aging process," Buffenstein said. "This animal may one day provide the clues to how we can significantly extend life."

APS provides a wide range of research, educational and career support and programming to further the contributions of physiology to understanding the mechanisms of diseased and healthy states. In 2004, APS received the Presidential Award for Excellence in Science, Mathematics and Engineering Mentoring.