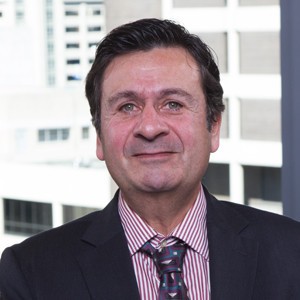 Dr. Didier Merlin, a professor in the Institute for Biomedical Sciences at Georgia State University and a Research Career Scientist at the VA Medical Center

Newswise — ATLANTA—Edible ginger-derived nano-lipids created from a specific population of ginger nanoparticles show promise for effectively targeting and delivering chemotherapeutic drugs used to treat colon cancer, according to a study by researchers at the Institute for Biomedical Sciences at Georgia State University, the Atlanta Veterans Affairs Medical Center and Wenzhou Medical University and Southwest University in China.

Colorectal cancer is the third most common cancer among men and women in the United States, and the second-leading cause of cancer-related deaths among men and women worldwide. The incidence of colorectal cancer has increased over the last few years, with about one million new cases diagnosed annually. Non-targeted chemotherapy is the most common therapeutic strategy available for colon cancer patients, but this treatment method is unable to distinguish between cancerous and healthy cells, leading to poor therapeutic effects on tumor cells and severe toxic side effects on healthy cells. Enabling chemotherapeutic drugs to target cancer cells would be a major development in the treatment of colon cancer.

In this study, the researchers isolated a specific nanoparticle population from edible ginger (GDNP 2) and reassembled their lipids, naturally occurring molecules that include fats, to form ginger-derived nano-lipids, also known as nanovectors. To achieve accurate targeting of tumor tissues, the researchers modified the nanovectors with folic acid to create FA-modified nanovectors (FA nanovectors). Folic acid shows high-affinity binding to the folate receptors that are highly expressed on many tumors and almost undetectable on non-tumor cells.

“Our results show that FA nanovectors made of edible ginger-derived lipids could shift the current paradigm of drug delivery away from artificially synthesized nanoparticles toward the use of nature-derived nanovectors from edible plants,” said Dr. Didier Merlin, a professor in the Institute for Biomedical Sciences at Georgia State and a Research Career Scientist at the VA Medical Center. “Because they are nontoxic and can be produced on a large scale, FA nanovectors derived from edible plants could represent one of the safest targeted therapeutic delivery platforms.”