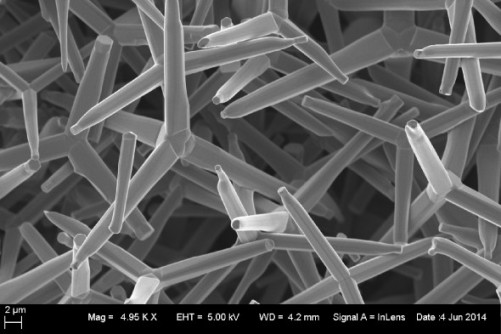 Newswise — An effective vaccine against the virus that causes genital herpes has evaded researchers for decades. But now, researchers from the University of Illinois at Chicago working with scientists from Germany have shown that zinc-oxide nanoparticles shaped like jacks can prevent the virus from entering cells, and help natural immunity to develop.

Results of the study are published in The Journal of Immunology.“We call the virus-trapping nanoparticle a microbivac, because it possesses both microbicidal and vaccine-like properties,” says corresponding author Deepak Shukla, professor of ophthalmology and microbiology & immunology in the UIC College of Medicine. “It is a totally novel approach to developing a vaccine against herpes, and it could potentially also work for HIV and other viruses,” he said.

The particles could serve as a powerful active ingredient in a topically-applied vaginal cream that provides immediate protection against herpes virus infection while simultaneously helping stimulate immunity to the virus for long-term protection, explained Shukla.

Herpes simplex virus-2, which causes serious eye infections in newborns and immunocompromised patients as well as genital herpes, is one of the most common human viruses. According to the Centers for Disease Control and Prevention, about 15 percent of people from ages 14-49 carry HSV-2, which can hide out for long periods of time in the nervous system. The genital lesions caused by the virus increase the risk for acquiring human immunodeficiency virus, or HIV.“Your chances of getting HIV are three to four times higher if you already have genital herpes, which is a very strong motivation for developing new ways of preventing herpes infection,” Shukla said.

Treatments for HSV-2 include daily topical medications to suppress the virus and shorten the duration of outbreaks, when the virus is active and genital lesions are present. However, drug resistance is common, and little protection is provided against further infections. Efforts to develop a vaccine have been unsuccessful because the virus does not spend much time in the bloodstream, where most traditional vaccines do their work.

The tetrapod-shaped zinc-oxide nanoparticles, called ZOTEN, have negatively charged surfaces that attract the HSV-2 virus, which has positively charged proteins on its outer envelope. ZOTEN nanoparticles were synthesized using technology developed by material scientists at Germany’s Kiel University and protected under a joint patent with UIC.

The researchers showed that female mice swabbed with HSV-2 and an ointment containing ZOTEN had significantly fewer genital lesions than mice treated with a cream lacking ZOTEN. Mice treated with ZOTEN also had less inflammation in the central nervous system, where the virus can hide out.

The researchers were able to watch immune cells pry the virus off the nanoparticles for immune processing, using high-resolution fluorescence microscopy.

“It’s very clear that ZOTEN facilitates the development of immunity by holding the virus and letting the dendritic cells get to it,” Shukla said.If found safe and effective in humans, a ZOTEN-containing cream ideally would be applied vaginally just prior to intercourse, Shukla said. But if a woman who had been using it regularly missed an application, he said, she may have already developed some immunity and still have some protection. Shukla hopes to further develop the nanoparticles to work against HIV, which like HSV-2 also has positively charged proteins embedded in its outer envelope.ZOTEN particles are uniform in size and shape, making them attractive for use in other biomedical applications. The novel flame transport synthesis technology used to make them allows large-scale production, said Rainer Adelung, professor of nanomaterials at Kiel University. And, because no chemicals are used, the production process is green.

Adelung hopes to begin commercial production of ZOTEN through a startup company that will be run jointly with his colleagues at UIC.