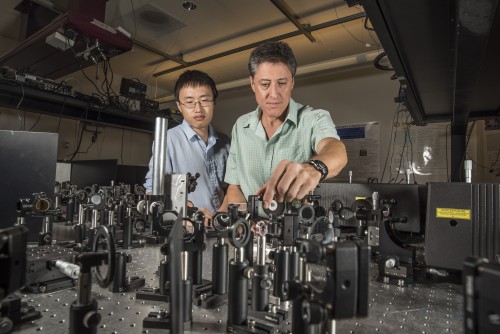 Former Sandia National Laboratories postdoctoral researcher Yuanmu Yang, left, and Sandia researcher Igal Brener set up to do testing in an optical lab. A team led by Brener published a Nature Photonics paper describing work on optical information processing at terahertz speeds, a rate much faster than what is achievable today by electronic means.

Newswise — ALBUQUERQUE, N.M. — A Sandia National Laboratories-led team has for the first time used optics rather than electronics to switch a nanometer-thick thin film device from completely dark to completely transparent, or light, at a speed of trillionths of a second.

The team led by principal investigator Igal Brener published a Nature Photonics paper this spring with collaborators at North Carolina State University. The paper describes work on optical information processing, such as switching or light polarization control using light as the control beam, at terahertz speeds, a rate much faster than what is achievable today by electronic means, and a smaller overall device size than other all-optical switching technologies.

Electrons spinning around inside devices like those used in telecommunications equipment have a speed limit due to a slow charging rate and poor heat dissipation, so if significantly faster operation is the goal, electrons might have to give way to photons.

To use photons effectively, the technique requires a device that goes from completely light to completely dark at terahertz speeds. In the past, researchers couldn’t get the necessary contrast change from an optical switch at the speed needed in a small device. Previous attempts were more like dimming a light than turning it off, or required light to travel a long distance.

The breakthrough shows it’s possible to do high contrast all-optical switching in a very thin device, in which light intensity or polarization is switched optically, said Yuanmu Yang, a former Sandia Labs postdoctoral employee who worked at the Center for Integrated Nanotechnologies, a Department of Energy user facility jointly operated by Sandia and Los Alamos national laboratories. The work was done at CINT.

“Instead of switching a current on and off, the goal would be to switch light on and off at rates much faster than what is achievable today,” Yang said.

A very rapid and compact switching platform opens up a new way to investigate fundamental physics problems. “A lot of physical processes actually occur at a very fast speed, at a rate of a few terahertz,” Yang said. “Having this tool lets us study the dynamics of physical processes like molecular rotation and magnetic spin. It’s important for research and for moving knowledge further along.”

Ultrafast information processing “matters in computing, telecommunications, signal processing, image processing and in chemistry and biology experiments where you want very fast switching,” Brener said. “There are some laser-based imaging techniques that will benefit from having fast switching too.”

The team’s discovery arose from research funded by the Energy Department’s Basic Energy Sciences, Division of Materials Sciences and Engineering, that, among other things, lets Sandia study light-matter interaction and different concepts in nanophotonics.

“This is an example where it just grew organically from fundamental research into something that has an amazing performance,” Brener said. “Also, we were lucky that we had a collaboration with North Carolina State University. They had the material and we realized that we could use it for this purpose. It wasn’t driven by an applied project; it was the other way around.”

The collaboration was funded by Sandia’s Laboratory Directed Research and Development program.

The technique uses two laser beams, one carrying the information and the second switching the device on and off.

The switching beam uses photons to heat up electrons inside semiconductors to temperatures of a few thousand degrees Fahrenheit, which doesn’t cause the sample to get that hot but dramatically changes the material’s optical properties. The material also relaxes at terahertz speeds, in a few hundred femtoseconds or in less than one trillionth of a second. “So we can switch this material on and off at a rate of a few trillion times per second,” Yang said.

Sandia researchers turn the optical switch on and off by creating something called a plasmonic cavity, which confines light within a few tens of nanometers, and significantly boosts light-matter interaction. By using a special plasmonic material, doped cadmium oxide from North Carolina State, they built a high-quality plasmonic cavity. Heating up electrons in the doped cadmium oxide drastically modifies the opto-electrical properties of the plasmonics cavity, modulating the intensity of the reflected light.

The next step is figuring out how to use electrical pulses rather than optical pulses to activate the switch, since an all-optical approach still requires large equipment, Brener said. He estimates the work could take three to five years.

“For practical purposes, you need to miniaturize and do this electrically,” he said.