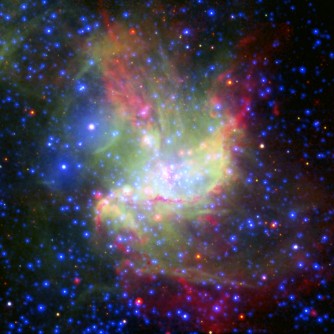 Newswise — The dazzling glow of young stars dominates images of the giant stellar nursery NGC 346, in the neighboring dwarf galaxy called the Small Magellanic Cloud. But this photogenic beauty is more than just a “pretty face.”

NGC 346 is a nearby proxy for the myriad star-forming regions that existed when the universe was ablaze with star formation just a few billion years after the big bang. Astronomers do not have telescopes powerful enough to study the details of star formation in these faraway “baby-boom” galaxies. The Hubble Space Telescope imaged NGC 346 to identify the optically bright stars. However, to understand the star-formation process astronomers must peer through the dusty stellar nurseries. Observers will use the sharp infrared vision of NASA’s James Webb Space Telescope to study NGC 346, which could help them develop a clearer picture of how the galaxies of long ago churned out stars at such a tremendous rate.

Webb will allow astronomers to carry out an unprecedented, detailed analysis of a star-forming region that is deficient in elements heavier than hydrogen and helium. In the very early universe only hydrogen and helium (cooked up in the big bang) were available raw materials for star formation. Subsequent generations of stars created heavier elements in their cores through nuclear fusion and through supernova explosions. These elements, such as carbon, nitrogen, and oxygen, are recycled through subsequent generations of stars, planets, and in the case of Earth, all forms of life.

Another link between NGC 346 and the star-forming heyday is the large amount of young, massive stars residing in these fertile areas. These stellar giants wreak havoc on their environment by unleashing searing ultraviolet radiation and powerful stellar winds (streams of charged particles). Energy from these “bullying” monster stars can destroy star-forming clouds of gas and dust and disrupt the disks encircling stars where planets can form.

“The Small Magellanic Cloud could be a local astrophysical laboratory to study processes that happened at the peak star-formation epoch, because those early galaxies contained lots of massive stars and were deficient in heavier elements,” said lead researcher Margaret Meixner, of the Space Telescope Science Institute and the Johns Hopkins University, both in Baltimore, Maryland. “The questions are what is the process of star formation in galaxies lacking heavier elements and how is star formation there different than star formation in the Milky Way, which contains heavier elements? You need to get a census of all the forming stars to answer these questions.”

A Census of Smaller-mass Stars

The Milky Way contains about 25 percent more heavier elements than the Small Magellanic Cloud. Numerous studies have been conducted on how stars form in the heavier-element-rich Milky Way. But Milky Way stars are nearby, while the stars in the Small Magellanic Cloud are too far away to study all of them in detail. “We’re really hoping to study the NGC 346 region on the scales that we’ve been able to study star formation in our Milky Way galaxy,” added team member Isha Nayak of the Johns Hopkins University in Baltimore, Maryland. “It’s hard to resolve things even in nearby galaxies like the Small Magellanic Cloud in the same manner as we can do in our own neighborhood. One question we want answered is, do all of these stars develop in the same way?”

The Webb observations will continue the work started by astronomers using telescopes such as the Herschel Space Observatory and NASA’s Spitzer Space Telescope. Spitzer and Herschel observations provided a census of the massive stars forming in NGC 346, which are eight times our Sun’s mass or larger. But Webb’s Near-Infrared Camera (NIRCam) and Mid-Infrared Imager (MIRI) instruments have the sharpness to catch the smaller stars, from eight solar masses to less than a solar mass. Astronomers will then have the complete mass distribution of stars in NGC 346. The Webb census may uncover as many as 10,000 young, dust-enshrouded fledgling stars, many of them less than a million years old.

Some of the fledgling stars in NGC 346 have protoplanetary disks encircling them, where planets may form. Researchers will use NIRCam and the MIRI imager to detect the near-infrared dust emission in these disks. “We will be able to determine if these disks are similar to the types of disks we see in our local solar neighborhood that are forming planetary systems,” Meixner said. “And, we hope to answer whether planetary systems can form in areas deficient in heavier elements or in very extreme star-forming conditions.”

Dust may be a nuisance for many people, but it is important for star formation. It helps to shield the dense, cold, gaseous cloud in which stars form from scorching radiation and harsh stellar winds that could tear the cloud apart. “Dust plays an important role with providing a safe haven for a stellar nursery,” Meixner explained.

Webb’s spectrographs will pinpoint the densest, dustiest regions where star formation is happening and will probe the evolution of the protoplanetary disks. “The question is what do you need to form stars?” Meixner said. “Maybe we will find a relationship between star formation and its environment.”

The observations described here will be taken as part of Webb’s Guaranteed Time Observation (GTO) program. The GTO program provides dedicated time to the scientists who have worked with NASA to craft the science and instrument capabilities of Webb throughout its development.

The James Webb Space Telescope will be the world's premier space science observatory when it launches in 2021. Webb will solve mysteries of our solar system, look beyond to distant worlds around other stars, and probe the mysterious structures and origins of our universe and our place in it. Webb is an international project led by NASA with its partners, the European Space Agency (ESA) and the Canadian Space Agency. 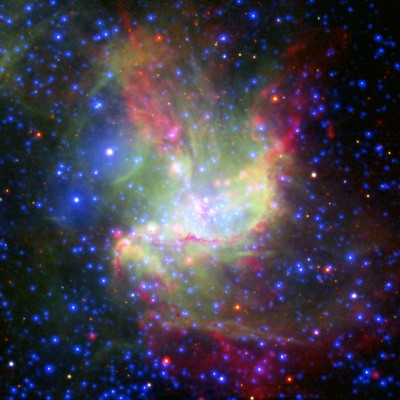