NASA Finds a Large Amount of Water in an Exoplanet's Atmosphere

ARTIST'S CONCEPT OF WASP-39 SYSTEM. Scientists used NASA's Hubble and Spitzer space telescopes to find a large amount of water in the atmosphere of WASP-39b, a hot, bloated, Saturn-mass exoplanet that resides about 700 light-years from Earth. This "hot Saturn" actually has three times as much water as Saturn does. WASP-39b whips around a quiet, Sun-like star, called WASP-39, once every four days. The exoplanet is currently positioned more than 20 times closer to its star than Earth is to the Sun. It is tidally locked, meaning it always shows the same face to its star. 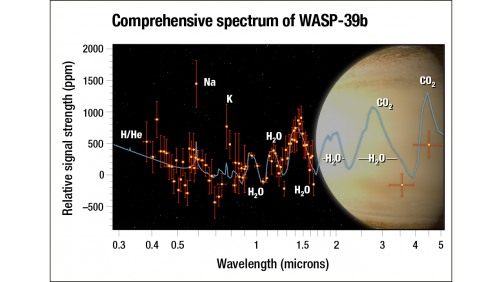 Using Hubble and Spitzer, astronomers analyzed the atmosphere of the "hot Saturn" exoplanet WASP-39b, and they captured the most complete spectrum of an exoplanet's atmosphere possible with present-day technology. By dissecting starlight filtering through the planet's atmosphere into its component colors, the team found clear evidence for water vapor. Although the researchers predicted they would see water, they were surprised by how much water they found — three times as much water as Saturn has. This suggests that the planet formed farther out from the star, where it was bombarded by icy material.

Much like detectives study fingerprints to identify the culprit, scientists used NASA’s Hubble and Spitzer space telescopes to identify the “fingerprints” of water in the atmosphere of a hot, bloated, Saturn-mass exoplanet some 700 light-years away. And, they found a lot of water. In fact, the planet, known as WASP-39b, has three times as much water as Saturn does.

Though no planet like this resides in our solar system, WASP-39b can provide new insights into how and where planets form around a star, say researchers. This exoplanet is so unique, it underscores the fact that the more astronomers learn about the complexity of other worlds, the more there is to learn about their origins. This latest observation is a significant step toward characterizing these worlds.

Although the researchers predicted they’d see water, they were surprised by how much water they found in this “hot Saturn.” Because WASP-39b has so much more water than our famously ringed neighbor, it must have formed differently. The amount of water suggests that the planet actually developed far away from the star, where it was bombarded by a lot of icy material. WASP-39b likely had an interesting evolutionary history as it migrated in, taking an epic journey across its planetary system and perhaps obliterating planetary objects in its path.

“We need to look outward so we can understand our own solar system,” explained lead investigator Hannah Wakeford of the Space Telescope Science Institute in Baltimore, Maryland, and the University of Exeter in Devon, United Kingdom. “But exoplanets are showing us that planet formation is more complicated and more confusing than we thought it was. And that’s fantastic!”

Wakeford and her team were able to analyze the atmospheric components of this exoplanet, which is similar in mass to Saturn but profoundly different in many other ways. By dissecting starlight filtering through the planet’s atmosphere into its component colors, the team found clear evidence for water. This water is detected as vapor in the atmosphere.

Using Hubble and Spitzer, the team has captured the most complete spectrum of an exoplanet’s atmosphere possible with present-day technology. “This spectrum is thus far the most beautiful example we have of what a clear exoplanet atmosphere looks like,” said Wakeford.

“WASP-39b shows exoplanets can have much different compositions than those of our solar system,” said co-author David Sing of the University of Exeter in Devon, United Kingdom. “Hopefully this diversity we see in exoplanets will give us clues in figuring out all the different ways a planet can form and evolve.”

Located in the constellation Virgo, WASP-39b whips around a quiet, Sun-like star, called WASP-39, once every four days. The exoplanet is currently positioned more than 20 times closer to its star than Earth is to the Sun. It is tidally locked, meaning it always shows the same face to its star.

Its day-side temperature is a scorching 1,430 degrees Fahrenheit (776.7 degrees Celsius). Powerful winds transport heat from the day-side around the planet, keeping the permanent night-side almost as hot. Although it is called a “hot Saturn,” WASP-39b is not known to have rings. Instead, it has a puffy atmosphere that is free of high-altitude clouds, allowing Wakeford and her team to peer down into its depths.

Looking ahead, Wakeford hopes to use the James Webb Space Telescope — scheduled to launch in 2019 — to get an even more complete spectrum of the exoplanet. Webb will be able to give information about the planet’s atmospheric carbon, which absorbs light at longer, infrared wavelengths than Hubble can see. By understanding the amount of carbon and oxygen in the atmosphere, scientists can learn even more about where and how this planet formed.

The Hubble Space Telescope is a project of international cooperation between NASA and ESA (European Space Agency). NASA’s Goddard Space Flight Center in Greenbelt, Maryland, manages the telescope. The Space Telescope Science Institute (STScI) in Baltimore conducts Hubble science operations. STScI is operated for NASA by the Association of Universities for Research in Astronomy, in Washington, D.C.

For more information about this study and Hubble, visit:

For more information about Spitzer, visit: