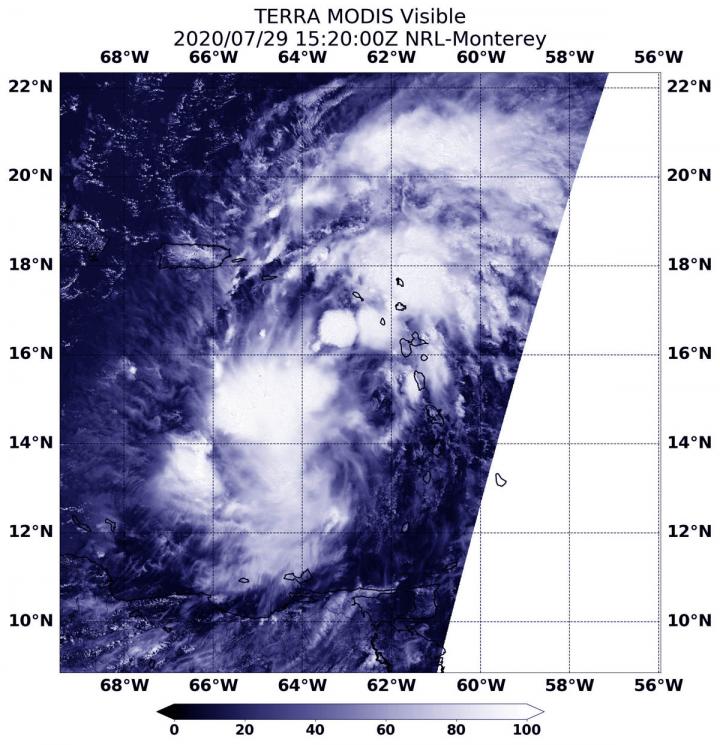 NASA's Terra satellite provided a visible image to forecasters of Potential Tropical Cyclone 9 on July 29 at 11:20 a.m. EDT (1520 UTC) after it moved into the eastern Caribbean Sea.

Newswise — NASA's Terra satellite obtained visible imagery of Potential Tropical Cyclone 9 after it moved into the Eastern Caribbean Sea and continued bringing heavy rainfall and gusty winds to the Leeward Islands, the U.S. and British Virgin Islands and Puerto Rico.

The National Hurricane Center has issued a number of warnings and watches associated with this potential tropical cyclone. A Tropical Storm Warning is in effect for Puerto Rico, Vieques, Culebra, the U.S. Virgin Islands, the British Virgin Islands, Montserrat, St. Kitts, Nevis, and Anguilla, St. Martin, and St. Barthelemy, Saba and St. Eustatius, St. Maarten, the Dominican Republic's entire southern and northern coastlines, the north coast of Haiti from Le Mole St Nicholas eastward to the northern border with the Dominican Republic, the Turks and Caicos Islands and the southeastern Bahamas including the Acklins, Crooked Island, Long Cay, the Inaguas, Mayaguana, and the Ragged Islands.

A Tropical Storm Watch is in effect for the central Bahamas, including Cat Island, the Exumas, Long Island, Rum Cay, and San Salvador.

Circulation Not Yet Well Defined on NASA Imagery

The Moderate Resolution Imaging Spectroradiometer or MODIS instrument that flies aboard NASA's Terra satellite captured a visible image of Potential Tropical Cyclone 9 on July 29 at 11:20 a.m. EDT (1520 UTC). The image showed strong thunderstorms around the center of circulation and in fragmented bands northeast and southwest of the center. Deep convection has consolidated and there is some evidence of banding over the northern and western portions of the large circulation.

At 11 a.m. EDT, National Hurricane Center (NHC) forecaster Daniel Brown noted, "Surface observations from the Lesser Antilles show that the broader circulation of the disturbance has become slightly better defined but a recent Air Force Reserve reconnaissance aircraft was still unable to find a well-defined circulation. Therefore, the system has not yet become a tropical cyclone."

At 2 p.m. EDT (1800 UTC), the disturbance was centered near latitude 16.2 degrees north and longitude 64.7 degrees west. The system is moving toward the west-northwest near 23 mph (37 kph), and this general motion with a reduction in forward speed is expected over the next few days. NHC noted the maximum sustained winds are near 45 mph (75 kph) with higher gusts. Some increase in strength is forecast through tonight, with weakening likely on Thursday due to land interaction. Some re-strengthening is possible by this weekend. The estimated minimum central pressure is 1006 millibars.

Environmental conditions are expected to be conducive to additional development, and a tropical storm is forecast to form later today or tonight. NHC said the formation chance through 48 hours remains high at 90 percent.

The NHC forecast calls for the low pressure area to strengthen into a tropical storm later in the day on July 29, 2020. If it does, it would be renamed Isaias.

NASA's Terra satellite is one in a fleet of NASA satellites that provide data for hurricane research.

Tropical cyclones/hurricanes are the most powerful weather events on Earth. NASA's expertise in space and scientific exploration contributes to essential services provided to the American people by other federal agencies, such as hurricane weather forecasting.