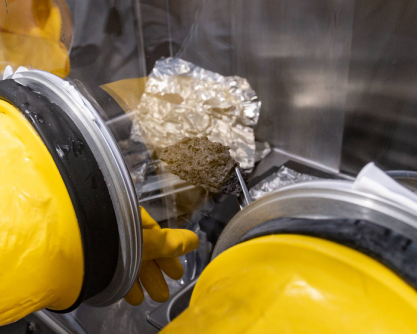 A frozen Apollo 17 sample being processed inside a nitrogen-purged glove box at NASA’s Johnson Space Center in Houston. The sample is one of many being studied as part of the ANGSA program.

Newswise — Scientists at NASA’s Goddard Space Flight Center in Greenbelt, Maryland, recently received samples of the lunar surface that have been curated in a freezer at NASA’s Johnson Space Center in Houston since Apollo 17 astronauts returned them to Earth in December 1972.

This research is part of the Apollo Next Generation Sample Analysis Program, or ANGSA, an effort to study the samples returned from the Apollo Program in advance of the upcoming Artemis missions to the Moon’s South Pole.

However, the process of getting the samples from Johnson to researchers at Goddard – as well as researchers at NASA’s Ames Research Center in California’s Silicon Valley, the Naval Research Laboratory in Washington, D.C., and the University of Arizona, Tucson – wasn’t simple. It’s a process that began more than four years ago when NASA’s Julie Mitchell and her Artemis curation team at Johnson began designing and retrofitting a facility to process the frozen Apollo 17 samples. This was a new approach and scientists were excited to employ a technique that could be applied to future lunar missions.

“We started this in early 2018 and there’s been a lot of technical challenges that we’ve had to overcome to get to this point,” said Mitchell. “This was seen as a practice run for preparing a facility for future cold sample processing.”

“By doing this work we're not just facilitating Artemis exploration, but we're facilitating future sample return and human exploration into the rest of the solar system,” Mitchell added. “I feel very privileged to contribute in this small way by developing the capabilities for us to collect these materials, bring them home safely, and curate them for the long term.”

Once the facility was ready, Ryan Zeigler, Apollo sample curator in the Astromaterials Research and Exploration Science (ARES) Division at Johnson, and his team had to adapt to the unique conditions designed by Mitchell’s team to keep the samples frozen during processing, which included decreased visibility due to frost and challenges manipulating the samples while working with thick gloves in a nitrogen-purged glove box, all of which took place inside a walk-in freezer maintained at minus 4 degrees Fahrenheit (minus 20 C). Being able to keep samples frozen will be important for Artemis as astronauts potentially return ice samples from the Moon’s South Pole.

“Everything we do involves a lot of logistics and a lot of infrastructure, but adding the cold makes it a lot harder,” said Zeigler. “It’s an important learning lesson for Artemis, as being able to process samples in the cold will be even more important for the Artemis mission than it is for Apollo. This work gives us some lessons learned and a good feed forward for Artemis.”

Once the frozen samples were processed and subdivided at Johnson by lunar sample processor Jeremy Kent, the samples were then express shipped in a cooler with dry ice, immediately opened at Goddard, and stored in a secure freezer. For the scientists now working with the treasures, there's something special about receiving samples that haven't been investigated in nearly five decades.

Jamie Elsila, a research scientist in the Astrobiology Analytical Laboratory at Goddard, is focusing on the study of small, volatile organic compounds for her research and analysis of the sample. Previous research showed that some lunar samples contain amino acids, which are essential to life on Earth. Her team wants to understand their origin and distribution in the solar system.

“We think some of the amino acids in the lunar soils may have formed from precursor molecules, which are smaller, more volatile compounds such as formaldehyde or hydrogen cyanide,” said Elsila. “Our research goal is to identify and quantify these small organic volatile compounds, as well as any amino acids, and to use the data to understand the prebiotic organic chemistry of the Moon.”

Natalie Curran, principal investigator for the Mid Atlantic Noble Gas Research Lab at Goddard, focuses on understanding the history that the samples may have experienced during their lifetime on the Moon. The surface of the Moon is a harsh environment and unlike the Earth, it doesn’t have an atmosphere to protect it from exposure to space.

“Our work allows us to use noble gases, such as argon, helium, neon, and xenon, to measure the duration a sample has been exposed to cosmic rays, and this can help us understand the history of that sample,” said Curran. “Cosmic rays can be damaging to organic material that may be in a sample, so understanding the duration helps to determine the effects that exposure has had on the organic.”

Both Elsila and Curran are in possession of frozen and non-frozen lunar samples. When these samples were brought to Earth, a portion was stored at room temperature and another portion was frozen, allowing for comparison between the two groups. Scientists will analyze both sets of samples to ascertain if there are differences in the organic content. Understanding any variations caused by the different curation methods might inform future decisions about how to store samples returned by Artemis astronauts, part of what the ARES team at Johnson will be doing.

For Elsila, “it’s very cool to think about all the work that went into collecting the samples on the Moon and then all the forethought and care that went into preserving them for us to be able to analyze at this time,” she noted.

As for Curran, “when you think of how these samples have come from another world, how far they have travelled and the solar system history they have preserved inside of them, it always blows my mind,” she added.

Learn more about how NASA studies Apollo samples and other celestial bodies at: