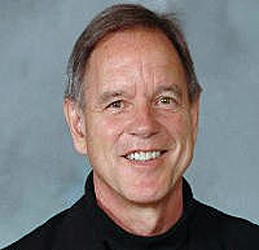 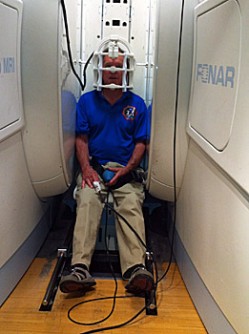 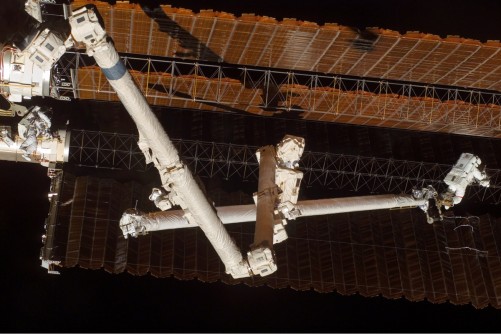 Hargens’ research helps astronauts like this one, shown here working on Canadarm 3, a remote manipulator system, stay healthier while in space and once they return to Earth.

Newswise — NASA has selected Alan Hargens, PhD, professor of orthopedic surgery at UC San Diego School of Medicine, to receive a 2017 Distinguished Public Service Medal. This is NASA's highest form of recognition for any non-government employee whose distinguished service, ability or vision has personally contributed to NASA's advancement of U.S. interests. Selection for this award means that Hargens’ achievements and contributions demonstrate a level of excellence that has made such a profound and lasting impact to NASA mission success that other forms of recognition by NASA would be inadequate.

Hargens will receive the medal today in a ceremony held at NASA Langley Research Center in Hampton, Va.

“When I received the call from a high-level manager at Johnson Space Center, I thought our lab was in trouble,” Hargens said. “Instead, I was completely surprised and overjoyed. It is a wonderful tribute to our lab’s orthopedic research at UC San Diego School of Medicine, as well as the success of our students and collaborators in space physiology!”

For more than 30 years, Hargens has demonstrated exceptional leadership in the study of spaceflight-induced adaptations of the cardiovascular and musculoskeletal systems. In the course of his work, he has led many peer-reviewed, NASA-funded investigations of humans and animals in real and simulated spaceflight. He has pioneered many innovative research approaches, while garnering respect from NASA and colleagues for his insight and humility.

“Dr. Hargens' work has spanned decades, involving a diverse range of scientific and technical accomplishments directly contributing to human space exploration with resulting research spinoffs that inform the medical community at large,” said Catherine Koerner, director of the Human Health and Performance Directorate at the NASA Johnson Space Center. “For these extraordinary efforts and contributions, he is most deserving of a NASA Distinguished Public Service Medal.” Koerner nominated Hargens for the award.

Hargens’ work has been continuously funded by NASA since 1987, totaling more than $7.7 million. The funds have supported many different projects, students and test subjects, including studies on many NASA space missions.

In one study, Hargens and colleagues examined six NASA crewmembers before and after spending four to seven months in microgravity on the International Space Station (ISS). The team found that astronauts on long space missions do not experience a change in spinal disc height. Instead, the muscles supporting their spines weaken. These findings suggested preventive steps astronauts can take to reduce the spinal effects of spaceflight.

Hargens has also led five bed rest studies, ranging from five to 60 days, to investigate the effects of simulated microgravity on cardiovascular, muscle, bone and spinal health in identical twins. In one of these studies, identical twins spent 30 days on strict bed rest, with their bodies tilted head-down to simulate microgravity, as experienced in spaceflight. Of each set of twins, one exercised and one did not. To exercise, the participants ran on a treadmill while lying down, using lower-body negative pressure to generate a novel form of artificial gravity. At the end of the study, the twins who exercised maintained their Earth-based physiology and performance as compared to severe losses in their non-exercising twins. These bed rest studies identified key physiological deconditioning elements that are now part of Hargens’ current ISS spine health research study.

Hargens also co-leads the most complex human physiological experiment ever undertaken on the ISS: "Fluid Shifts," an investigation assessing how spaceflight-induced fluid shifts might contribute to vision impairment. In addition, he was an investigator on the one-year mission TWINS study.

The impact of Hargens' work is evidenced in eight books, more than 300 peer-reviewed papers, 56 book chapters and his eight patents. In addition, he is committed to training the next generation of scientists — he has mentored more than 100 students, including two who later became NASA astronauts.

“Dr. Hargens’ spaceflight physiology contributions are substantial and his other work in land-based comparative physiology has been considered ground-breaking,” said Steven Garfin, MD, professor and chair of the Department of Orthopaedic Surgery at UC San Diego School of Medicine. “All of his important projects have been clinically translational. Throughout his illustrious career at UC San Diego, Dr. Hargens has received many high-level awards and honors, including six previous ‘outstanding performance’ commendations from NASA. This one, however, is at the top. We are very proud of his accomplishments.”

Hargens previously served as chief of the Space Physiology Branch and Space Station Project Scientist at NASA Ames Research Center. He earned his bachelor’s degree in chemistry at the University of Minnesota, Minneapolis, and his PhD in marine biology at Scripps Institution of Oceanography, UC San Diego.