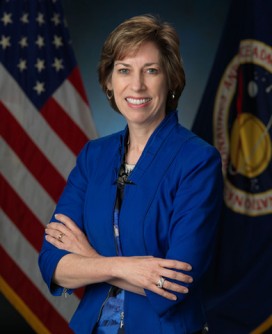 Most rewarding part of the job: Representing a very talented team that accomplishes amazing things.

Hardest part of the job: Wishing I could do more to reward [my team] and make their jobs easier. Still, NASA is rated as the "Best Place to Work in Government" through surveys taken by federal employees!

What it means to be the first Hispanic woman to go to space and the first Hispanic to lead the NASA Johnson Space Center: It's been amazing to be able to speak with and inspire students and adults alike for the last 25 years. Some have not had much exposure to Hispanics in the STEM fields and it has really opened their eyes to the rewards of studying science and math and the interesting, challenging careers that are available.

Biggest surprise about outer space: How quickly I felt removed from my life on Earth after getting to space.

Favorite memory of San Diego State: Playing flute in the wind ensemble and in the marching band at football games.

How the CSU helped you: SDSU prepared me well for graduate school and a career as a research engineer, which is what I was doing when I got selected for the astronaut corps. I had the opportunity to do optics research for my physics senior project and then went on to get my Ph.D. at Stanford in optical information processing.

Advice for recent CSU graduates: Continue to learn new things and work hard. It's called "commencement" for a reason — you are beginning a journey in which your actions will in large part determine the opportunities that you will have. ​