NASA's Webb Will Study the 'Building Blocks' of Our Solar System

Researchers will observe far-flung asteroids, some with moons, to learn more about the makeup and history of our solar system.

Newswise — Millions of asteroids roam our solar system. Many are clustered between Mars and Jupiter in the main asteroid belt while another group, known as Trojans, both lead and follow Jupiter. What can these chunks of rock, which zip around the solar system like race cars, tell us about the formation of the solar system? Upcoming research with NASA's James Webb Space Telescope, led by Andrew S. Rivkin of the Johns Hopkins University Applied Physics Laboratory, will yield new data that will help astronomers begin to unravel these mysteries.

"What's great about asteroids is that there are so many of them," said Rivkin. "It means there is always something bright enough and in the right place for Webb to observe."

Rivkin is collaborating with Cristina A. Thomas of Northern Arizona University; Stefanie N. Milam of NASA's Goddard Space Flight Center; and Heidi Hammel, a planetary astronomer and vice president for science of the Association of Universities for Research in Astronomy (AURA) in Washington, D.C., to observe these asteroids in near- and mid-infrared light.

This team's program will add many new observations to the growing body of research about asteroids, and will help them learn more about the origins and makeup of asteroids, providing clues to the history of how planets moved around in the early solar system.

The Dawn of the Solar System

Imagine our solar system as it formed 4.6 billion years ago: around our young Sun, a disk of gas and dust swirled, slowly condensing and creating small objects. As larger bodies like Jupiter and Saturn began forming, they collected gobs of gas, growing bigger and bigger. Soon, the gravitational influence of these larger bodies started to sculpt the disk, creating gaps.

Over millions of years, it's theorized that Jupiter, Saturn, Uranus and Neptune began moving from where they initially formed to their current locations, continuing to shape the inner solar system and eventually locking leftover rocks between Mars and Jupiter in regular orbits. As Jupiter moved inward, it kept these small objects stirred up, which meant that they could not as easily merge with one another to eventually form larger bodies like planets.

These messy, rocky leftovers are asteroids. Scientists now know that asteroids were the "building blocks" of the rocky, inner planets. Some formed closer to the Sun and others formed farther away, which means their compositions vary a lot. Perhaps the most intriguing detail researchers have already learned is that many asteroids may not have formed where they currently orbit.

This research team plans to study five known asteroids, three in the main asteroid belt and two Trojans, in near- and mid-infrared wavelengths to complement and extend other NASA missions' observations, and test new techniques with Webb.

They will observe these asteroids in part by using Webb's Near-Infrared Spectrograph (NIRSpec), an instrument that breaks light into its component colors to create a spectrum that the researchers will analyze to learn about each object's composition.

One key target in the main asteroid belt is a dwarf planet known as Ceres, which was visited by NASA's Dawn spacecraft from 2015 to 2018. Ceres has minerals containing ammonia on its surface, leading researchers to wonder whether it formed farther out in the solar system or if the dwarf planet incorporated material from farther afield. By obtaining Webb measurements at longer wavelengths than those obtained by Dawn, the team will be able to use the unique and complementary data set to verify if previous conclusions about its surface composition are correct. At the same time, the observations will help establish a technique to observe targets that may be slightly too bright to observe in these wavelengths with Webb. "By doing the best science we can do with this bright object, we may open doors to new science opportunities with Webb for other researchers," Milam said.

Pallas, the second-largest asteroid in the main belt and a dwarf planet candidate, is another important target. Because of its orbit, Pallas would be very difficult for a spacecraft to visit. By observing it with Webb, this team will gather data about its surface and composition that is otherwise difficult to obtain. The team will also compare measurements of Pallas and another dwarf planet candidate, Hygeia, to data about Ceres, helping them identify the similarities and differences of their targets. These comparisons may offer clues about the formation histories of these building blocks of the inner planets.

The Trojan targets, Patroclus and Hektor, are very different from Webb's other asteroid targets—not only due to their location near Jupiter, but because they also have moons. Hektor is a binary and its moon orbits closely. In contrast, Patroclus and its moon have more space between them. "Webb will allow us to investigate each asteroid and moon separately," explained Rivkin. "By studying their moons, we'll also be able to examine how each of these binaries formed and compare these two systems." The data will also help astronomers refine models of how the Trojan asteroids were captured in their current orbits.

The team selected the program's targets carefully, ensuring that their data enhance those from existing and future missions and observatories. "Patroclus, for example, is a target of NASA's upcoming Lucy mission," Thomas said. "We can also compare the Webb data to previous data from ground-based observatories. There will be a lot of complementary data to examine."

By unraveling the histories of these particular asteroids, the research team hopes to learn more about our solar system's past. They emphasize that Webb provides a unique opportunity, not only due to its specialization in infrared light, but also because some of these targets are so difficult to observe with other facilities. "Webb lets us 'visit' a lot more asteroids with really high-quality observations we can't get with telescopes on the ground," Rivkin said.

The observatory also offers new scientific opportunities. "Webb will open a frontier for all scientists," explained Milam. "Our data will lead to new questions and provoke a lot of new science ideas for astronomers who are considering using Webb in the future."

This research is being conducted as part of a Webb Guaranteed Time Observations (GTO) program of the solar system led by Heidi Hammel, a Webb interdisciplinary scientist. Dedicated GTO time was provided to the scientists who have worked with NASA to craft the science capabilities of Webb throughout its development.

"The purpose of these investigations is to ensure we're not only doing the best science we can do, but also setting the stage for the science that will come with Webb in the future," Hammel said.

The James Webb Space Telescope will be the world's premier space science observatory when it launches in 2021. Webb will solve mysteries in our solar system, look beyond to distant worlds around other stars, and probe the mysterious structures and origins of our universe and our place in it. Webb is an international program led by NASA with its partners, ESA (European Space Agency) and the Canadian Space Agency. 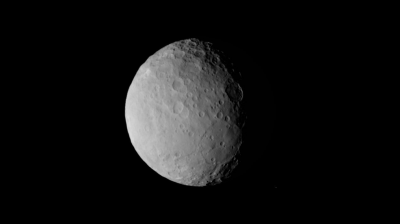 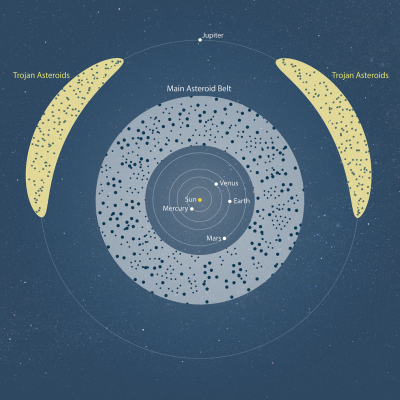 Caption: The main asteroid belt lies between Mars and Jupiter, and Trojan asteroids both lead and follow Jupiter. Scientists now know that asteroids were the original 'building blocks' of the inner planets. Those that remain are airless rocks that failed to adhere to one another to become larger bodies as the solar system was forming 4.6 billion years ago.