Dragonfly program manager Peter Bedini of Johns Hopkins APL explains the technology and science of the proposed dual-quadcopter mission to Titan. On Dec. 20, Dragonfly was chosen as a finalist for NASA’s New Frontiers mission. 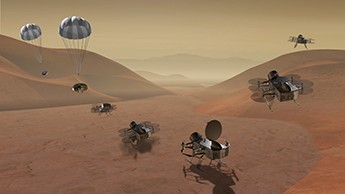 he Dragonfly dual-quadcopter, shown here in an artist’s rendering, would land on Saturn’s moon Titan and then make multiple flights to explore diverse locations as it characterizes the habitability of the ocean world’s environment. On Dec. 20, Dragonfly was chosen as a finalist for NASA’s New Frontiers program.

Newswise — A Johns Hopkins Applied Physics Laboratory (APL) proposal for an innovative, highly instrumented rotorcraft that would investigate prebiotic organic chemistry and habitability on Saturn’s largest moon has been selected by NASA as one of two finalists for the agency’s next New Frontiers mission.

Dragonfly is a dual-quadcopter lander that would take advantage of the environment on Titan to fly to multiple locations, some hundreds of miles apart, to sample materials and determine surface composition. The four science instruments on the vehicle would investigate Titan’s organic chemistry and habitability, monitor atmospheric and surface conditions, image landforms to investigate geological processes, and perform seismic studies

“Titan is a fascinating ocean world,” said APL’s Elizabeth Turtle, principal investigator for Dragonfly. “It’s the only moon in the solar system with a dense atmosphere, weather, clouds, rain, and liquid lakes and seas — and those liquids are ethane and methane. There’s so much amazing science and discovery to be done on Titan, and the entire Dragonfly team and our partners are thrilled to begin the next phase of concept development.”

The ability to fly would allow Dragonfly to navigate the Titan environment to explore a variety of surface sites. Titan’s dense atmosphere — four times denser than Earth, with gravity one-seventh as high — make flight on Titan easier than on Earth. Since the atmosphere is dense and hazy, making solar panels less effective, Dragonfly would use a Multi-Mission Radioisotope Thermoelectric Generator (MMRTG), like the Curiosity rover on Mars, to power its systems.

“This brings us one step closer to launching a bold and very exciting space exploration mission to Titan,” said APL Director Ralph Semmel. “We are grateful for the opportunity to further develop our New Frontiers proposals and excited about the impact these NASA missions will have for the world.”

The two mission finalists — Dragonfly, and the Comet Astrobiology Exploration Sample Return led by NASA Goddard Space Flight Center and Cornell University — will receive funding through the end of 2018 to further develop and mature their concepts. NASA plans to select one of these investigations in the spring of 2019 to continue on to subsequent mission phases.

Additionally, APL would design, build and operate the spacecraft for two mission proposals that will receive technology development funds to prepare them for future NASA competitions. The Enceladus Life Signatures and Habitability (ELSAH) concept will receive funds to develop cost-effective techniques to limit spacecraft contamination and thereby enable life-detection measurements by cost-capped missions. The Venus In situ Composition Investigations (VICI) concept will further develop its Venus Element and Mineralogy Camera to operate in the harsh conditions on Venus; the instrument uses lasers on a lander to measure the mineralogy and elemental composition of rocks on the surface of Venus.

APL, in Laurel, Maryland, built and is operating the first NASA New Frontiers mission, New Horizons, which made the historic first reconnaissance of Pluto in 2015 and will encounter Kuiper Belt object 2014 MU69 on Jan. 1, 2019. APL has built and flown 69 spacecraft and more than 150 instruments that have visited every planet in our solar system.