Wistar and the Future of Team Science 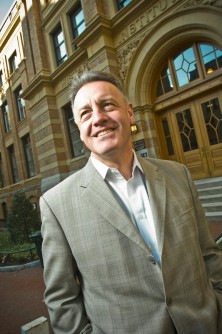 Newswise — For Dario Altieri, M.D., the future of cancer medicine at The Wistar Institute reads something like a treatment for a superhero film. Dr. Altieri is director of Wistar’s NCI-designated Cancer Center and the Institute’s Chief Scientific Officer, and he wants to accelerate the rate at which bench science affects cancer medicine.

“The way forward now is to build teams of investigators with widely different sets of knowledge and expertise,” said Dr. Altieri. “We want our scientists to feel the complete freedom of discovery and to pursue their ideas, of course, but the challenge is that we must work together.” His mission is to bring together diverse teams of scientists to transform research discoveries into new drugs and new treatment strategies. As a basic research center with no associated clinic of its own, it is up to Dr. Altieri and his colleagues to partner with hospitals to both receive vital medical samples for study and to conduct early stage clinical trials based on Wistar science.

Get To Know The Wistar Institute

With 32 professors, The Wistar Institute faculty is smaller than most academic departments, yet the Institute is known for the far-reaching impact of its research. From the first standardized laboratory animal (the Wistar rat), to the current post-genomics era, Wistar scientists have been at the forefront of medical research. Wistar discoveries have led to the development of vaccines for rabies, rubella, and rotavirus, the identification of genes associated with breast, lung, and prostate cancer, and the development of monoclonal antibodies and other significant research technologies and tools.

The Wistar NCI-designated Cancer Center is comprised of three main programs, each built around a set of three programs:

Molecular and Cellular Oncogenesis works to better understand the biological impact of specific molecular events that cause tumor formation and the progression of metastatic cancer.

Gene Expression and Regulation seeks to identify genes and genetic mechanisms involved in cancer and other diseases, with a particular focus on gene regulation.

Tumor Microenvironment and Metastasis addresses basic questions about how the cells that surround a tumor play a role in its development, growth and spread, and to try to develop new means of attacking the cancer and preventing its spread by harnessing and repurposing the microenvironment that supports it.

To augment Wistar’s research power, the Cancer Center also maintains eight core facilities, which expands the research power of individual labs with expert assistance in such areas as proteomics and bioinformatics.

According to Dr. Altieri, the “era of the lone discoverer” has long since passed. In the decade since the human genome was first published, scientists have shown that, more than anything, human biology is far more complicated than most could imagine.

To broaden the team, however, requires a fixation on transparency and openness. Dr. Altieri points to how the advocacy community, particularly in breast cancer and melanoma, has significantly influenced both cancer awareness and the flow of research dollars. Advocacy groups, government, and the pharmaceutical industry need to work with academic biomedical research on a very intimate level, Dr. Altieri says.

According to Dr. Altieri, Wistar is uniquely poised to lead transparently. Its faculty, not beholden to profit margins or patient volumes, is free to create links between otherwise competing entities in both industry and medicine. “Philadelphia has this remarkable concentration of academic institutions, yet it retains a culture of respect that underlies collaboration,” he said.

Partnering with clinical collaborators across Philadelphia and the NCI-designated Community Cancer Centers at Lehigh Valley Health System and the Helen F. Graham Cancer Center of Christiana Care, in Delaware, allows Wistar the means to link science to clinical advancements.

The most difficult concept is that of courage. In particular, as Dr. Altieri sees it, the courage to take on new challenges, for scientists to go where the science leads them and not be afraid to push the boundaries of knowledge, even in defiance of the status quo. The Institute itself requires courage to support its scientists as they follow their research, Dr Altieri says.