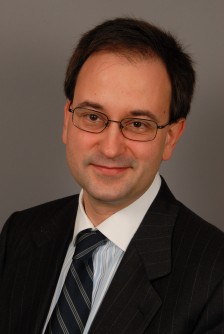 Renowned mood disorders specialist Dan Iosifescu, MD, MSc, has been appointed to the faculty in the Department of Psychiatry at NYU Langone Medical Center.

Newswise — A renowned clinician-scientist specializing in mood disorders has been recruited to the Psychiatry faculty at NYU Langone Medical Center, furthering the department’s national reputation in diagnosing and managing treatment-resistant depression and related disorders.

Dan Iosifescu, MD, MSc, will be joining NYU Langone in March 2017 to lead a number of research initiatives both at the medical center and at its research affiliate, the Nathan Kline Institute (NKI) in Rockland County, NY. He also will provide clinical care within the department’s faculty group practice.

Specifically, Dr. Iosifescu will serve as director for clinical research at NKI where he will lead the inpatient clinical research units and the outpatient clinical research. Using neuroimaging (MRI, MRS) and neurophysiology (quantitative EEG) techniques, he will investigate structural, molecular and functional brain abnormalities in refractory depression and related mood disorders and their impact on clinical treatment. Dr. Iosifescu also has a particular interest in the impact of medical diseases that are often associated with mood disorders, such as vascular disease. His research has been funded by the National Institute of Mental Health (NIMH) and through other sources, including industry. At the medical center, Dr. Iosifescu will lead outpatient clinical studies utilizing magnetic resonance spectroscopy (MRS) to better understand persistent depression and mood disorders. He also will spearhead new initiatives in utilizing transcranial magnetic stimulation (TMS) and novel pharmacological treatments for severe mood disorders. “Recruiting Dr. Iosifescu is a great opportunity for us, and it is indicative of the well-regarded reputation for excellence the department enjoys,” says Charles R. Marmar, MD, the Lucius Littauer Professor and chair of Psychiatry at NYU Langone. “He brings the combined talents of a senior researcher and a fine clinician. Equally important, he will wear many hats for us serving in leadership positions at NKI and NYU Langone.” It has been a highly productive end to 2016 for NYU Langone’s Psychiatry Department, particularly on the recruitment front. Last month, it was announced that Naomi Michele Simon, MD, MSc, who has led seminal research in complicated grief and other anxiety disorders during a distinguished 20-year career at Harvard Medical School and Massachusetts General Hospital (MGH), will join NYU Langone in July 2017 to oversee its new Anxiety and Complicated Grief Program. This new service will focus on investigating and treating panic disorder, social anxiety, generalized anxiety disorder, PTSD and complicated grief. About Dr. IosifescuDr. Iosifescu joins NYU Langone from Mount Sinai, where he was director of the Mood and Anxiety Disorders Program since 2010. Previously Dr. Iosifescu has served at Massachusetts General Hospital (MGH) as Director of Translational Neuroscience and as Site Director of the NIMH Bipolar Trials Network. He also was Associate Professor of Psychiatry at Harvard Medical School. Dr. Iosifescu earned his medical degree from the Institute of Medicine and Pharmacy in Bucharest, Romania, and completed his psychiatric residency at MGH and McLean Hospital, serving as chief resident in consultation-liaison psychiatry. His research training included a neuroimaging fellowship in the Neuroscience Laboratory at Harvard Medical School, a psychopharmacology fellowship in the MGH Mood and Anxiety Disorders Institute, and a fellowship in the Clinical Investigator Training Program at Harvard and MIT. Dr. Iosifescu also holds Master’s degree in Medical Science from Harvard University.