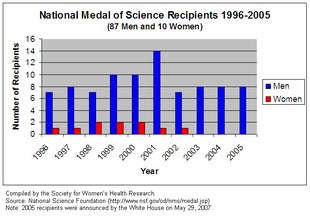 Newswise — The 2005 recipients of the National Medal of Science were announced by President George W. Bush on May 29 and, for the third straight year, no women scientists received the honor. Over the last 10 years, only 10 women have received the award compared to 87 men.

"When the significant and ongoing contributions of women in science go unacknowledged, it can discourage even the best and brightest women from pursuing a career in these disciplines," said Phyllis Greenberger, president and CEO of the Society for Women's Health Research, a Washington, D.C., based advocacy organization. "We know that positive exposure and visibility for women and minority scientists greatly enhance their opportunity for career advancement, as well as inspire young people who can see someone 'like them' excelling in science."

To ensure that women scientists receive the professional recognition they deserve, the Society for Women's Health Research established the RAISE Project this year. The RAISE Project aims to ensure that qualified women are nominated for top national awards in science, medicine and engineering.

"Women scientists across the nation are doing tremendous work, but they often do not receive the recognition they deserve for their achievements," Greenberger said. "Women often fail to nominate themselves and many never ask others to nominate them for awards, so we have established a program to aid the process.

In addition to RAISE Project, the Society promotes the accomplishments of women scientists through its own award, the Society for Women's Health Research Medtronic Prize for Scientific Contributions to Women's Health. Presented annually, the prize was established in 2006 to recognize a women scientist or engineer for her contributions to women's health and encourage women to work on issues uniquely related to women's health.