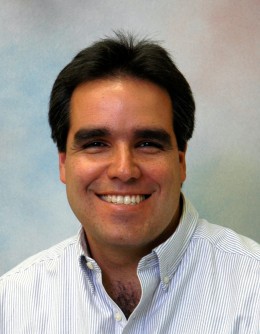 ARUP Labs will include in its menu of tests an HIV diagnostic test invented at University Hospitals’ Translational Laboratory by Miguel Quinones-Mateu, PhD, (shown) scientific director at the UH lab and assistant professor at the Department of Pathology, Case Western Reserve University School of Medicine.

Under the agreement, ARUP will include in its menu of tests an HIV diagnostic test invented at University Hospitals’ Translational Laboratory by Miguel Quinones-Mateu, PhD, scientific director at the UH lab and assistant professor at the Department of Pathology, Case Western Reserve University School of Medicine.

The novel test, DEEPGEN™HIV, monitors the success of anti-HIV treatment by determining drug resistance and the ability of the virus to infect different cells based on deep genetic sequencing. ARUP, a nonprofit enterprise of the University of Utah, will include DEEPGEN in its menu of tests and will nationally market the assay. Clinical samples will then be referred to UH Translational Laboratory (UHTL, www.uhtl.org) in Cleveland from all 50 states.

DEEPGEN™HIV provides a sensitive platform for HIV physicians and researchers, both in the academia and industry. The assay allows the detection of minority variants at frequencies unimaginable with current HIV genotypic tests based on standard (Sanger) sequencing.

“Although the clinical relevance of these minority members of the viral population is still under debate, it is reasonable to assume that the earlier these mutant viruses are detected, the sooner the proper strategy can be defined to control their growth,” said Dr. Quiñones-Mateu. “DEEPGEN™HIV is now the primary HIV genotyping assay used by HIV physicians at the Case Western Reserve University/University Hospitals AIDS Clinical Trials Unit, and we have been analyzing clinical specimens from other institutions around the region. This agreement with ARUP will expedite the use of this innovative and highly sensitive assay nationwide, which will allow us to enhance the care and treatment of HIV-infected individuals across the country.”

“I am excited about our relationship with ARUP, as it appears to be a natural synergy that we both may leverage to expand the quality of diagnostic testing and care provided to patients with HIV nationally,” said Ronald E. Dziedzicki, chief operating officer at UH Case Medical Center.

“Our relationship with UH Case Medical Center enables ARUP to offer this innovative test to our clients for the management of patients with HIV,” said Jerry Hossong, MD, DDS, ARUP’s chief medical officer and director of laboratories. “We are very pleased to include this test as part of our comprehensive menu of services.”

About University HospitalsUniversity Hospitals, the second largest employer in Northeast Ohio with 25,000 employees, serves the needs of patients through an integrated network of 12 hospitals, 26 outpatient centers and primary care physician offices in 15 counties. At the core of our $3.5 billion health system is University Hospitals Case Medical Center, the primary affiliate of Case Western Reserve University School of Medicine. UH Case Medical Center is home to some of the most prestigious clinical and research centers of excellence in the nation, including cancer, pediatrics, women's health, orthopaedics, radiology, neuroscience, cardiology and cardiovascular surgery, digestive health, transplantation and genetics. Its main campus includes UH Rainbow Babies & Children's Hospital, ranked among the top children’s hospitals in the nation; UH MacDonald Women's Hospital, Ohio's only hospital for women; and UH Seidman Cancer Center, part of the NCI-designated Case Comprehensive Cancer Center at Case Western Reserve University. For more information, go to www.uhhospitals.org.

About ARUP Laboratories Founded in 1984, ARUP Laboratories is a leading national reference laboratory and a nonprofit enterprise of the University of Utah and its Department of Pathology. ARUP offers more than 3,000 tests and test combinations, ranging from routine screening tests to esoteric molecular and genetic assays. ARUP serves clients across the United States, including many of the nation’s top university teaching hospitals and children’s hospitals, as well as multihospital groups, major commercial laboratories, group purchasing organizations, military and other government facilities, and major clinics. In addition, ARUP is a worldwide leader in innovative laboratory research and development, led by the efforts of the ARUP Institute