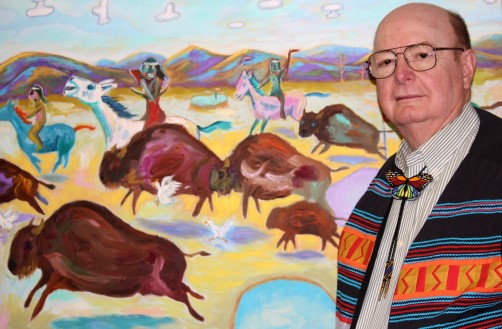 Dr. J.W. Wiggins stands in front of one of his favorite works, "Edward Curtis Paparazzi--Black Hills Golf and Country Club," 2007, Oil on Canvas, by Jim Denomie, a Chippewa living in Minnesota. He is wearing a vest embroidered by close friend, June Lee, a Seminole from Oklahoma.

Newswise — Dr. J.W. Wiggins is not only the collection manager and curator for the Sequoyah National Research Center (SNRC) at UALR, he is himself an avid collector and aficionado of contemporary Native American art.

His in-depth knowledge of Native American artists and their works has garnered him the trust of curators and artists alike, who come from across the region and the country to seek his counsel and occasionally request loans of his artworks for their projects.

The exhibit features works on loan from SNRC, as well as the Arkansas Arts Center and Springfield Art Museum in Missouri.

The curator, Dr. Manuela Well-Off-Man, is a personal friend of Wiggins, who pulled his ceramic pieces from Northeastern Oklahoma in UALR’s permanent holdings for her consideration.

“I think she had planned on taking two, maybe three pots; she ended up taking 22,” Wiggins said of his friend, as a knowing smile crept across his face.

The exhibit, which began in February and scheduled to last one year, was extended for an additional month.

The vessels, which draw upon cherished traditions and designs in Native American ceramics, were selected because of their contemporaneous blending of the traditional with the modern.

“The works clearly refine what it means to be a Native American artist today,” Wiggins said.

Most of them represent Cherokee traditions, from the Cherokee Nation of Oklahoma and the Eastern Band of Cherokees from North Carolina. Other tribes include Muscogee Creek, Seminole, and Osage.

From Hobby to Life’s WorkThe massive collection at Sequoyah National Research Center houses much more than ceramics; its 2,700-plus works represent Wiggins’ life work and passion.

In fact, a unique aspect of the collection is that the collector knows each artist personally and is friends with almost all whose works are included, unusual in a collection this size. Indeed, each of the artists expressed a desire to be represented in the collection and proudly add this fact to their artistic resumes.

“I felt immediately like I was at home,” he said, “and I began to collect pieces myself.”

From that auspicious beginning, the collection slowly gathered steam and grew to the respectable size and renown it enjoys some 40 years later.

Recently, Wiggins slowly worked his way around the renovated space in University Plaza on a rainy afternoon, retracing in exacting detail how certain individual pieces were acquired for the collection.

As he did, Wiggins seemed much like a proud father showing the work of his children. And, like children within the same family, the artists share certain similarities.

All, for example, use their respective mediums to frame the reality of modern life for Native Americans, even as they draw on deeply ingrained indigenous traditions.

Although many carry undertones of fear, regret, or anger, nearly all also impart a wry sense of humor - the kind born out of recognition that life is full of irony and must never to be taken for granted.

Wiggins said more art from the collection has been publicly exhibited than ever before and interest in it continues to increase.

“But it is still surprising how often tipis and totem poles are the images people have in mind when they think of Native American art,” he added. “People will literally walk in and expect to see that sort of thing.”

Wiggins focuses primarily on artists from the heartland rather than art from Southwestern Pueblos or the Northwest Coastal areas. He says works from the central regions of America were less frequently collected and studied by art historians when the collection began.

All pieces date after 1940 and none are older than the collector.

The facility provides space for a team of interns, students, volunteers, staff, and researchers to utilize the Center’s archives, which holds one of the largest collections of Native thought and expression in the world. It includes a comprehensive collective of Native newspapers, periodicals, and other publications.

The SNRC is also home to numerous Native manuscript and special collections, having acquired other materials related to Native communities, press history, and literature.

Near the front of the facility is the Dr. J. W. Wiggins Gallery of Native American Art, a showcase for rotating exhibits throughout the year, including the current exhibit, “Toy Tipis and Totem Poles: Native American Stereotypes in the Lives of Children,” on display through Dec. 19.

The gallery is free and open to the public from 8 a.m. to 5 p.m. Monday through Friday.

The SNRC is located in University Plaza, Suite 500 which faces Asher Avenue on the south side of UALR’s campus.