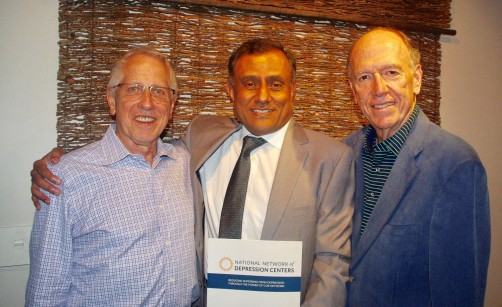 Loyola Medicine psychiatrist Murali Rao, MD, is founding chair of the National Network of Depression Centers – India Foundation. "We aim to bring mental health literacy to a population for whom the stigma of depression is the greatest obstacle to seeking treatment," Dr. Rao said.

Dr. Rao, who is from India, is chair of Loyola Medicine's department of psychiatry and behavioral neurosciences and a nationally known expert on depression.

An agreement signed July 9 recognizes NNDC-I as an affiliate member of NNDC, a nonprofit consortium of 25 leading clinical and academic institutes in the United States, plus affiliate members in Canada and Germany.

Dr.  Rao said NNDC-­I was inspired by and modeled on its American counterpart. He explained that the two organizations share the same goals, but the priorities are slightly different. “In the U.S., research and education come first, followed by reducing the stigma of depression," Dr. Rao said. "NNDC-­I focuses first and foremost on education and fighting stigma, with research an added component.”

The collaboration, Dr. Rao added, "will result not only in the exchange of scientific and academic resources, but in increased awareness of the need for education and research in the field of depression."

“This agreement marks a significant step forward in building our global network of depression centers,” said NNDC executive director Patricia Rinvelt. “The collective power of the world’s leading clinicians, researchers and other experts means we are transforming the field of depressive illness and related disorders on a global scale.”

Chris Underhill, MBE, founder of BasicNeeds and BasicNeeds India, is an honorary patron of NNDC-I. "I am delighted to be associated with this important moment and of course will give all my support to the endeavors of NNDC India," Mr. Underhill said. "India has some wonderful resources to offer mentally ill people, but, overall, they are spread very thinly across the country, with some individuals receiving no benefits at all. In so far as this agreement can support mentally ill people in India, I strongly welcome it and wish NNDC India strength, ingenuity and tenacity in the struggle going forward.”

More than 300 million people are living with depression worldwide, according to the World Health Organization. In 2017, the organization said there was an “urgent need for increased investment” in what has become the world’s leading cause of ill health and disability.

"Our goals were to identify collaborators striving to build an organization committed to collecting large samples, using standardized measurements, emphasizing longitudinal monitoring and determining which treatments work best for the different causes of depressions and bipolar illnesses," said John F. Greden, founding chair of the NNDC. "We started with 16 founding members in 2008 and grew to 25 of the leading depression centers in the U.S. More recently, we've formed affiliations internationally with centers in Canada and Germany and are now are delighted to welcome the NNDC India Foundation to join our mission and increase the momentum to address these diseases globally."

Raymond DePaulo, MD, of Johns Hopkins University, NNDC Chair, said, "The leadership team assembled for the founding board of directors for NNDC India Foundation is truly impressive. I am pleased to welcome their affiliation with the NNDC. It is an honor to work with Dr. Rao and the group of leaders in psychiatry in India as they build NNDC India Foundation and bring much needed focus to depressive diseases in India and contribute to solutions globally."

Among those instrumental in developing the new liaison between the Indian organization and its American counterpart were Dr. Rao’s wife, Mani Rao, MBA, and daughter, Anita Rao, MD, who also have recently formed a U.S. based NNDC-­India Foundation, a non-­profit 501(c) organization for seeking overseas support and memberships of various categories from Indian diaspora around the world, and grants and trusts for global health.