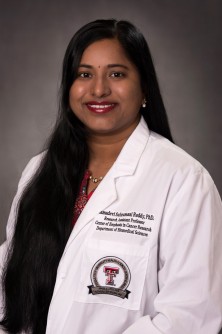 Assistant Professor Ramadevi Subramani Reddy, Ph.D., received $25,150 from the foundation to study a plant-based chemical compound called 2, 3-dehydrosalanol (DHS) as a potential treatment for pancreatic cancer. In studies, DHS has been noted for its ability to suppress tumor growth.

The pancreas is an organ that assists with digestion of food. Although cancer of this organ is relatively rare, it has a very low survival rate; for example, more people died of pancreatic cancer than breast cancer in the U.S. in 2021, according to National Cancer Institute estimates.

In similar research supported by a recent grant from the Lizanell and Colbert Coldwell Foundation, Dr. Subramani Reddy is studying the anti-cancer effects of gedunin, a natural compound from the Azadirachta indica tree native to the Indian subcontinent.

“Research like this is important for our local community as we work to develop safe and effective cancer drugs, and also for the research contributions across the world that could potentially save lives,” Dr. Subramani Reddy said.

TTUHSC El Paso serves 108 counties in West Texas that have been historically underserved. It is designated as a Title V Hispanic-Serving Institution, preparing the next generation of health care professionals and researchers, 48% of whom identify as Hispanic and are often first-generation college students.