National Science Foundation Funds Multi-Institutional Project to Improve Harvests of One of the Most Important Crops in U.S. Agriculture

Newswise — ST. LOUIS, MO, October 11, 2017 – The Donald Danforth Plant Science Center, one of the world’s largest independent plant science institutes, today announced a five-year, $3.4 million grant from the National Science Foundation (NSF) to improve the productivity of maize. The project led by Andrea Eveland, Ph.D., assistant member at the Danforth Center, will develop novel methods for predicting a plant’s phenotype from its genetic code and precisely manipulating plant architecture traits in maize that enhance yield potential. The collaborative project brings together expertise in molecular genetics, developmental genomics and statistics to meet the food and fuel demands of a growing population.

Maize is a cereal crop with the highest dollar value in the U.S. and abroad. Maize yields have increased eight-fold in the past century due largely to selecting for optimal architecture at increased planting densities. However, yield gains have plateaued in recent years.

“Developing the next generation of high-yielding varieties will require a detailed knowledgebase of the complex gene networks that control plant morphology, which can be applied to breeding or engineering optimal plant architectures,” said Eveland. “Since the networks controlling different aspects of growth and development are tightly interconnected, it is essential that we understand how manipulation of one trait affects others at the molecular level. This precise level of control is largely coordinated by the non-genic regions of the genome, which we know very little about. With this project, we hope to make significant advances in decoding gene regulatory mechanisms connecting important agronomic traits.”

Plant architecture, the number and arrangement of organs (e.g. branches, leaves, flowers) on a plant, is central to crop productivity and has been a primary target in the domestication and improvement of many crops. For example, breeding for upright leaves allows light capture within the lower canopy in dense fields, while optimizing the structure of the grain-bearing panicle improves seed set, grain fill and harvestability. In maize, genes that control leaf angle also affect panicle architecture, so understanding how these traits are connected at the molecular level will enable greater precision in decoupling target outcomes from undesirable effects.

“One of the things that excites me the most about this grant is the exploration of multivariate statistical genotype-to-phenotype models that we plan to undertake,” said Lipka. “These models will enable us to distinguish between which genomic regions harbor genes responsible for variation in both leaf angle and panicle architecture and which genomic regions contain genes responsible for only one of these two classes of traits. It is our aim to make these and other statistical approaches we use through the course of this project available to the research community.”

The project will also include an education component featuring interactive curriculum in quantitative genetics and genomics for high school and rural community college teachers and students. 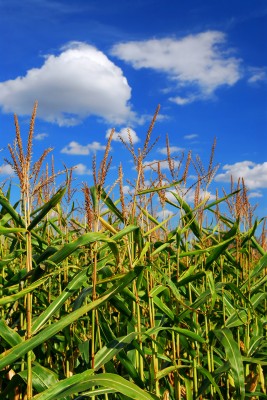 Caption: National Science Foundation Funds Multi-Institutional Project to Improve Harvests of One of the Most Important Crops in U.S. Agriculture 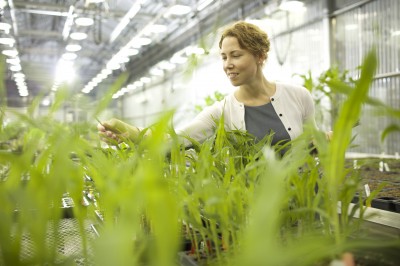 Caption: The project led by Andrea Eveland, Ph.D., assistant member at the Danforth Center, will develop novel methods for predicting a plant’s phenotype from its genetic code and precisely manipulating plant architecture traits in maize that enhance yield potential.