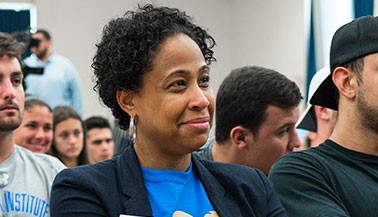 Newswise — Gabrielle St. Léger, Ed.D., dean of students for the two New York campuses of New York Institute of Technology (NYIT), has been selected as a 2018 Diamond Honoree by the American College Personnel Association (ACPA), a leading professional organization for college and university administrators and other leaders in higher education.

The Diamond Honoree Program, established by the ACPA Foundation in 1999, chooses an elite few from among those nominated across the country. Those selected have distinguished themselves as teachers, administrators, researchers, writers, and beyond, and have demonstrated sustained contributions to higher education and the student affairs profession.

St. Léger, known to students as Dr. Gaby, has been part of the NYIT student affairs team since 2014. Following a competitive national search, in April 2016 she was appointed dean of Campus Life for the NYIT-Old Westbury campus, and in August 2017, her role further expanded when she was named dean of students for both NYIT’s Old Westbury and Manhattan campuses, responsible for residence life, student involvement, student conduct, first-year experience, orientation, Greek life, student emergency response, and more.

“I view this as a humbling career highlight, looking at the past years’ classes of honorees who have been recognized. These are colleagues and mentors that have inspired me in the rewarding work to ensure student success,” St. Léger said.

Diamond Honorees are “championed” by dedicated individuals who recognize their contributions and choose to raise funds for the ACPA Foundation in honor of each Diamond Honoree's outstanding, sustained commitment to higher education. Christopher D. Catching, Ed.D., assistant vice president for Student Affairs at Southern Connecticut State University, nominated St. Léger for this honor.

“Dr. St. Léger has served the student affairs profession in numerous capacities for over 17 years as an active member and leader within ACPA and other professional organizations and as a researcher, facilitator, and mentor,” Catching wrote in his nomination letter. “Dr. St. Léger’s greatest contribution to the profession has been her service and commitment to social justice and inclusion as a Faculty and Lead Coordinator for the PAN African Summit, formerly the African American Male and Female Summit, for the past six years.”

Among her many professional and personal commitments, St. Léger also serves as a deaconess at the Reflections of Christ’s Kingdom in Brooklyn. She holds a Bachelor’s degree in English, a Master of Arts in Secondary Education Language Arts, and a Doctorate of Education in Educational Leadership Studies from West Virginia University. She resides in Hempstead, N.Y.