18-Feb-2015 11:00 AM EST, by University of Massachusetts Amherst
favorite_border 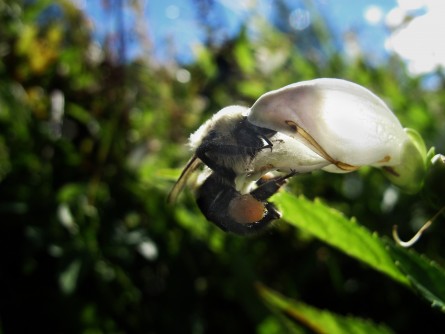 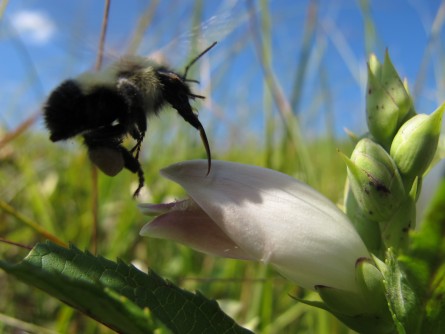 Newswise — AMHERST, Mass. – Researchers studying the interaction between plants, pollinators and parasites report that in recent experiments, bees infected with a common intestinal parasite had reduced parasite levels in their guts after seven days if the bees also consumed natural toxins present in plant nectar.

In this early and most comprehensive study of its kind, researchers at the University of Massachusetts Amherst and Dartmouth College studied hundreds of eastern bumblebees, Bombus impatiens, and their intestinal parasite Crithidia bombi, using eight separate toxic chemicals known as secondary metabolites produced by plants to protect themselves against predators.

They found that toxic chemicals in nectar reduced infection levels of the common bumblebee parasite by as much as 81 percent by seven days after infection. UMass Amherst evolutionary ecologist Lynn Adler says, “We found that eating some of these compounds reduced pathogen load in the bumblebee’s gut, which not only may help the individual bees, but likely reduced the pathogen Crithidia spore load in their feces, which in turn should lead to a lower likelihood of transmitting the disease to other bees.”

She adds, “Because plants just sit there and can’t run away from things that want to eat them, they have evolved to be amazing chemists. They make biological compounds called secondary metabolites, which are chemicals not involved in growth or reproduction, to protect themselves. They are amazing in the diversity of what they can produce for protecting themselves or for attracting pollinators.”

Adler says results may have implications for growers who depend on pollinators, who may want to think about planting pollinator-friendly hedgerows and gardens containing plants that produce natural herbal remedies for some of the common parasites and diseases that ail bees and other pollinating insects.

“The more we look, the more we see that these compounds are in nectar and pollen too,” she adds. “With so many people looking at bee health these days, it’s taken a long time for us to realize that perhaps we should be paying attention to how floral secondary compounds mediate pollinator dynamics and their interactions with pathogens. Having bees consume these protective chemicals could be a natural treatment of the future.” Commercial honeybee growers already use one such chemical, thymol, found in thyme plants, to treat mite infestations.

For these experiments, the researchers infected a total of 539 eastern bumblebees with the intestinal parasite, Crithidia, which can shorten lifespan of individual bees and reduce a colony’s queen production. They then allowed the bees to feed on one of eight naturally occurring nectar chemicals or on a control nectar. Seven days later, they measured the parasite load in the insects’ intestines.

The scientists used bees from many different colonies to reduce the possibility of a colony-specific response and used 15 to 67 individuals with an average of 38 per exposure group. Some experiments were repeated separately at Dartmouth and at UMass Amherst to make sure results were reliably repeatable.

The eight chemicals studied were nicotine and anabasine found in nectar of flowers in the tobacco family, caffeine from coffee and citrus nectar, amygdalin from almond nectar, aucubin and catalpol from turtlehead flowers, gallic acid from buckwheat nectar and thymol from basswood tree nectar.

Adler notes, “A lot of our spices and medicines come from plant secondary metabolites. Think of aspirin and chili powder. Because we’re big, we can eat a little chili powder on our food and it’s just a taste sensation. But for an insect the same dose might be fatal. That’s what the plant is counting on.”

Overall, she and colleagues found no effect on bee survival with secondary metabolite treatment, “but we can pretty confidently say several compounds reduced the pathogen load,” Adler says.

As for whether bees know about the benefits of plants’ chemical medicine cabinets and can treat themselves when they are sick, she adds, “That is the million dollar question, the one most often asked when I give talks about these ideas. Unfortunately, it’s too early to tell. We just don’t know yet.”

The work was supported by grants from the National Science Foundation’s Division of Environmental Biology. 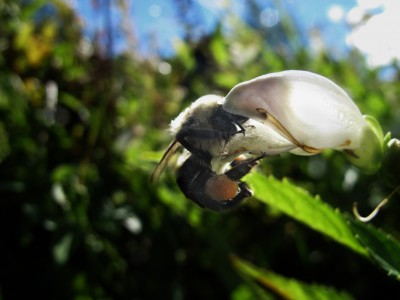 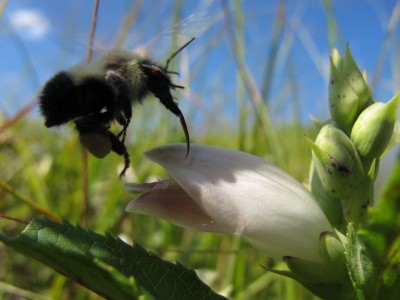