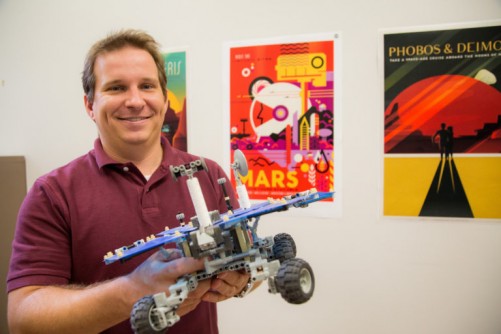 Assistant Professor of Physics and Astronomy Christopher Edwards, who joined NAU faculty at the beginning of the Fall 2016 term, is a participating scientist on the Mars Science Laboratory Curiosity Rover, and has worked on numerous other Mars missions.

Newswise — Is there liquid water on the surface of Mars? Scientists have been theorizing that for years, but findings published by a Northern Arizona University researcher in the journal Geophysical Research Letters are sparking new debate and attracting attention by national media outlets, including the Washington Post and National Geographic, and numerous science news websites such as Space.com. Edwards was also interviewed by several NPR stations. The findings were announced in recent statements made by NASA and NASA’s Jet Propulsion Laboratory in Pasadena (JPL).

Christopher Edwards, NAU Assistant Professor of Physics and Astronomy, and co-author Sylvain Piqueux, of JPL, studied five Mars years (equal to about 12 Earth years) of data gathered by the Mars Odyssey spacecraft to determine that certain features of the planet previously believed to be the result of flowing liquid water hold no more than three percent water–the same as or less than the driest deserts on Earth.

The highly sensitive infrared images, taken of a crater-wall region within the large Valles Marineris canyon system on Mars, measure the temperature of the planet’s surface, which can indicate the presence of moisture in the soil–or lack thereof.

“I’m not surprised by the press coverage,” said Edwards. “The presence of liquid water on the surface of Mars is a hot topic for NASA because it is so compelling.” He explained, “Our findings are a bit of a course correction for the scientific community, but this is how the scientific process works; it’s a normal part of the ongoing debate.”

Edwards, who joined NAU faculty at the beginning of the Fall 2016 term, is a participating scientist on the Mars Science Laboratory Curiosity Rover, and has worked on numerous other Mars missions.

“Our next steps are to study similar sites on Mars that show the same seasonal darkening trends,” said Edwards. “At these sites, we’ll apply the same thermal imaging technique to determine their temperature and the likelihood of water.”

What’s it like to be involved in research at that level? “I’m happy to be part of this grand adventure we’re on with NASA–it’s pretty amazing,” said Edwards. “Although sometimes the day-to-day work can be monotonous and detailed, it’s pretty exciting when you take a step back and recognize you’re commanding a rover on another planet to gather the data you need for projects that have the potential to shape the course of humanity. That’s spectacular.”

Edwards is excited to contribute to the growth of the university’s planetary research program. In addition to his ongoing research focusing on the composition, physical properties and processes, and morphology of planetary surfaces, Edwards will be developing new instrumentation at NAU for potential use on future NASA interplanetary missions. He is also building a new computer lab that will give NAU researchers, including students, access to data from spacecraft on the Martian surface and in Mars obit, as well as the ability to participate in Curiosity Mars Rover science operations.