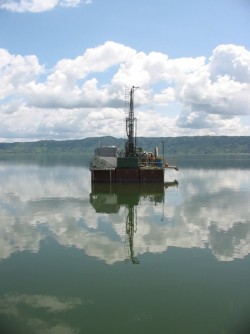 Newswise — By studying African lake sediments from the past 20,000 years, scientists are learning more about abrupt climate shifts, advancing their understanding of changing weather patterns.

In a recent paper published in Nature Geoscience, co-author on an NAU assistant professor Nicholas McKay analyzes core samples from Lake Bosumtwi in Ghana. The isolated lake was formed by a meteor and sits like a bowl on the landscape giving scientists a clear view of environmental changes.

The lake samples were obtained by drilling 1,000 feet to the lake's bottom and another 1,000 feet into the meteor impact structure. The sediments span 1-million years but the paper focused on the past 20,000 years.

McKay and co-authors describe how Africa changed from a humid environment to the more arid region of today. Earlier studies show the Sahara Desert and other north African regions shifted from lush to dry between 5,000 and 6,000 years ago. Analysis of Lake Bosumtwi reveals humid conditions remained until about 3,000 years ago, providing supportive habitats for humans, animals and plants.

“We saw a complex response in climate changes, not this uniform picture with all of Africa doing the same thing,” McKay said.

By analyzing isotopes from leaves in lake sediments, the researchers gained an understanding of monsoonal changes. In other parts of Africa, these changes are measured by blowing dust. “Rapidly, it went from no dust to lots of dust, instead of being a gradual transition from being wet to being dry. That is what we are working to understand,” added McKay, who said Africa’s complexities reveal clues to future climate change.

Although the large scale, north-to-south change was gradual, McKay and his team focused on areas where the change happened much quicker than expected. The researchers suggested the anomalies were created by the reactions of soil moisture and plants to the diminishing monsoon.

“The plants do a good job of reinforcing their own existence by making it a little moister and bringing more rain,” McKay said. “But if you cross the moisture threshold where the plants die, then it also stops raining and it sort of snowballs really fast and that is how you can get these really rapid changes,” McKay said.

While the paper focused on the Holocene geologic time period, the abrupt localized climate changes provide insights to existing weather models and could benefit analysis of present and future climate shifts.