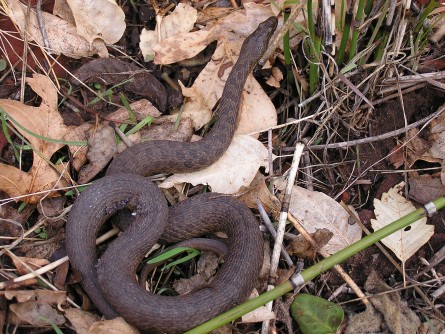 Newswise — The narrow-headed gartersnake population is dwindling, but Erika Nowak and her team at Northern Arizona University are determined to aid in its recovery, recently rescuing several snakes from ash-filled floods in Oak Creek Canyon following the Slide Fire.

Nowak, associate research professor of Biological Sciences at NAU and herpetologist at the Colorado Plateau Research Station, has been studying the narrow-headed gartersnake, which was recently listed as a threatened species under the Endangered Species Act. She said Oak Creek is one of the few places where the snake numbers are still somewhat healthy and where she has been monitoring the population for more than a decade.

As a result of the Slide Fire, the burned areas of Oak Creek were at risk for ash-filled flooding due to monsoon rains. When ash blankets the habitat, the fish that the gartersnakes feed on aren’t able to survive. Additionally, the ash covers rocks and small holes making it difficult for the snake to hide while hunting. Though the snakes can survive for some time without food, they will eventually starve to death, Nowak explained.

Nowak organized the survey and rescue mission to Oak Creek last month alongside the U.S. Fish and Wildlife Service and U.S. Forest Service. The team included NAU graduate students and undergraduate interns from the Watershed Research and Education Program, as well as members of the Arizona Game and Fish Department, U.S. Forest Service, Oak Creek Ambassadors and several volunteers.

Nowak explained that the team used a preemptive two-pronged approach. “The first part was to do comprehensive surveys to assess the status of the population in Oak Creek before the flooding occurred,” Nowak said. “The second was to salvage some of the snakes to ensure we had genetic material from them in captivity in case flooding caused the unimaginable.”

The researchers believe that there are several factors contributing to the decline in population in the Oak Creek area, including major threats by nonnative species such as crayfish, predatory fish and invasive plants. Other contributing factors are habitat degradation causing higher water temperatures and decreased water quality and accidental or intentional killing of snakes by humans.

Scott Nichols, institutional veterinarian at NAU and another key player in the preservation efforts, drew blood samples from 11 gartersnakes from Oak Creek in order to establish a baseline for the blood levels in the animals.

“We are really ramping up our efforts to recover the species,” Nowak said. “We want to survey but also collect blood so we can compare blood values from captive snakes to wild snakes to improve our husbandry efforts.” In general, caring for the species in captivity has been difficult, she added.

The team also has been refining efforts for breeding over the past year with captive narrow-headed gartersnakes from the Black River, an area affected by the 2011 Wallow Fire, which involves pairing males and females and simulating the natural lifecycle of the snakes including hibernation. One female recently was confirmed pregnant and a second exhibiting reproductive behavior is scheduled for an ultrasound in the coming weeks.

“We envision NAU being a really critical player in the recovery of the species,” Nowak said. The team hopes the snakes will thrive and continue to breed so they can eventually be reintroduced into the wild in places like Oak Creek.