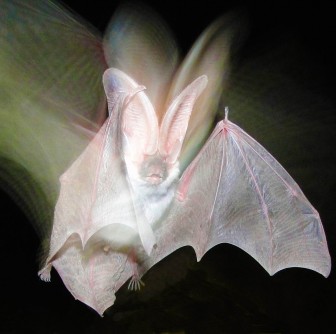 Newswise — Two NAU researchers are learning more about how bats are faring in the post-wildfire Ponderosa pine forests, of which 3.2 million acres have been scorched during the past decade. Because bats help pollenate plants, aid in reforestation and maintain ecosystem balance by eating large quantities of insects, scientists believe it is imperative to understand the effects of wildfire on bat habitats.

The scientists discovered bat species are reacting differently to post-wildfire habitats, some avoid the burned areas and other species seem to prefer the wide-open spaces left in the wildfire’s wake.

Arizona has a rich variety of bats with 28 species, more than all other states except for Texas. Bats, the world’s smallest mammal, are considered an indicator species foretelling problems in the environment.

Maternity colonies house up to 900 bats making them an important post-wildfire research subject. In eastern Arizona bats roost in snags, tall dead or dying trees, of which there is an abundance following the Wallow Fire. This information is important for forest service employees who are deciding which burned trees should be removed to improve safety from falling trees.

“In the short term, it doesn’t appear that wildfire will have substantial impacts on maternity roost habitat,” Saunders said. “However, as large high severity wildfires continue, paired with the added stress of climate change, we will likely see a decrease in available snags for habitat and possibly a shift in the forest composition.” Saunders added that their relatively short-term research should be continued in order to make stronger land management recommendations. Chambers and Saunders used various methods to measure bat activity from capture and release at ponds to attaching tiny radio transmitters for tracking activity and roosts. They compared severe burn sites to areas with relatively low to moderate fire damage.

“When we look at individual species, we find differences in who likes snags that are unburned versus burned. And there is one species, the Arizona Myotis, that tends to use unburned snags or those with less than 20% of the tree has been burned,” Chambers said.

In 2014, the researchers discovered a decrease of species diversity at both high and low severity sites, a finding that could be an anomaly or could indicate bats are moving to other areas. Additional research will be conducted later this year to build on the findings.

While the short-term effects don’t appear too severe, Chambers is concerned about the future. “Fire-killed snags usually fall within 10 years and it can take hundreds of years to regrow Ponderosa pine, if they grow back at all,” said Chambers, referring to the loss of habitat for bats and other animals, changes that could lead to other environmental repercussions.