CESM2 will allow exploration of an impressive breadth of scientific questions 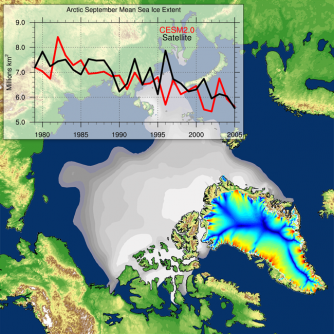 (©UCAR. Image courtesy of Alice DuVivier, Gunter Leguy, and Ryan Johnson/NCAR. This image is freely available for media & nonprofit use.)

This image from a global CESM2 historical simulation shows key aspects of the Arctic climate system. The speed at which simulated glacier ice flows over Greenland is represented, with warmer colors indicating faster speeds. The September 2005 sea ice concentration is depicted in grayscale, with white indicating higher ice concentrations. The time series of September mean sea ice extent simulated by CESM2 is in good agreement with the satellite observations provided by the National Snow and Ice Data Center for the late 20th century and early 21st century, with both showing the recent sea ice decline.

Newswise — BOULDER, Colo. — The National Center for Atmospheric Research (NCAR) has released an updated version of its flagship climate model to include a host of new capabilities — from a much more realistic representation of Greenland's evolving ice sheet to the ability to model in detail how crops interact with the larger Earth system to the addition of wind-driven waves on the model's ocean surface.

The Community Earth System Model version 2 (CESM2) is an open-source community computer model largely funded by the National Science Foundation, which is NCAR's sponsor, and the U.S. Department of Energy's Office of Science.

Released publicly last week, CESM2 builds on a succession of climate models, each cutting edge for their day, stretching back decades to a time when their software only simulated atmospheric circulation. By comparison, CESM2 includes interactions among the land, ocean, atmosphere, land ice, and sea ice, representing the many important ways the different parts of the Earth system interact.

"The breadth of the science questions we can tackle just significantly expanded; that's very exciting to me," said Jean-François Lamarque, who led the effort to develop CESM2 until recently. "Every time we release a new model we're providing a better tool to do the science. It's a more complicated tool, but the world is very complicated."

The new capabilities of CESM2 include:

A full list of updates with more technical descriptions can be found at http://www.cesm.ucar.edu/models/cesm2/whatsnew.html.

Work on CESM2 began in earnest about five years ago, but scientists began tinkering with how to improve the model as soon as CESM1 was released in 2010. It's no different with CESM2.

"We've already started to think about what we can improve for CESM3," Lamarque said. "We know, for example, that we want to make the ocean model better to expand the kind of scientific questions it can be used to answer."

Collaboration and input from the broader Earth system science community has always been at the heart of the complex model development facilitated by NCAR. For example, the land model component of the new CESM2 tapped the expertise of more than 50 researchers at 16 different institutions.

CESM, which is freely available, is an important tool for Earth system science researchers across the United States and the globe who are studying everything from the predictability of seasonal droughts to accelerating sea level rise. The NCAR-based model is one of about a dozen leading climate models around the globe that scientists use to research the changing climate and contribute what they find to the Intergovernmental Panel on Climate Change.

Because the Earth system is so complicated, and computing resources are so limited, the computer models used to simulate how Earth's climate behaves use a mix of equations that actually represent the physics, biology, and chemistry behind the processes that unfold in the Earth system — from evaporation to ozone formation to deforestation to sea ice melt — and "parameterizations," which simplify small-scale processes and estimate their impacts.

"CESM2 is representing much more of the physics than past models, and we are doing a much better job of it," said CESM Chief Scientist Gokhan Danabasoglu, who is now leading the model development effort. "There are numerous new capabilities in all component models as well as significant infrastructure improvements for flexibility and easier portability.”

These improved equations allow the model to do an even better job replicating the real world.

"The model is our lab — the only laboratory we get when studying the climate," Lamarque said. "So it has to be close enough to the real world to be relevant."

*Media & nonprofit use of images: Except where otherwise indicated, media and nonprofit use permitted with credit as indicated above and compliance with UCAR's terms of use. Find more images in the NCAR|UCAR Multimedia & Image Gallery.