Near Infrared Nanoparticles Shine a Bright Light on Cancer 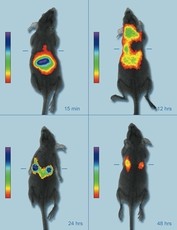 A live mouse model showing the accumulation of near infrared fluorescent nanoparticles in breast cancer tumors for enhanced imaging.

Newswise — A new imaging method for breast cancer has been developed by a team of scientists from Penn State Milton S. Hershey Medical Center and Penn State College of Medicine and the departments of Materials Science and Engineering and Physics at Penn State. Their research, utilizing encapsulated fluorescent molecules in calcium phosphate nanoparticles and non-toxic near infrared imaging (NIR), appears in the Sept. 19 on-line issue of ACS Nano.

More effective early detection of diseases is one of the promises of nanotechnology. Current imaging methods, such as x-rays and magnetic resonance imaging, are limited in the size of tumors they can detect, the depth they can penetrate the body, and by their potential side effects. Another promising imaging technique, near infrared bioimaging, is a noninvasive, painless, and non-ionizing form of radiation that operates at wavelengths just above that of visible light. By combining NIR imaging with nanoparticles containing a NIR fluorescing dye, indocyanine green, the researchers were able to detect 5mm diameter breast cancer tumors in a live mouse model over a period of four or more days.

Indocyanine green is the only NIR organic dye approved by the Food and Drug Administration (FDA) for use in the human body. The nanoparticles, which are around 20 nm in diameter—one five thousandth the diameter of a human hair—are made of calcium phosphate, a biocompatible material that has long been used as a bone replacement. Unlike other nanoparticles considered for imaging and drug delivery, e.g., semiconductor quantum dots, the biodegradable components of calcium phosphate nanoparticles are already widely present in the bloodstream.

In addition to the combination of near infrared imaging and nanoparticles, a second innovation is the development of a fundamentally new method for processing nanoparticulates. The process is called van der Waals HPLC, which stands for high performance liquid chromatography. Materials scientist Jim Adair, whose team synthesized the particles, says "Our technique takes advantage of the large van der Waals forces associated with particles, as opposed to the small van der Waals forces associated with molecules, atoms, and ions. The hard part in the synthesis was making sure the particles did not clump together. The critical stage was the laundering of all the nonessential byproducts associated with the synthesis. By the end, we had a very clean suspension of particles in which all the spectator ions, molecules, and atoms had been washed away from the basic nanoparticles."

The Hershey group, led by pharmacologist Mark Kester, showed that their nanoparticles provide the fluorescent dye with 200% greater photoefficiency compared to indocynine green injected into the bloodstream, with a 500% greater photostability. In a separate experiment discussed in the paper, the researchers were able to image through 3cm of dense pig muscle tissue, which should correlate to at least 10 cm, and likely much deeper, in patients, according to Adair.Support for this research was provided by the Penn State Materials Research Institute and Penn State Hershey Medical Center, Penn State College of Medicine. Partial support was also provided by Keystone Nano, Inc. Contributing to the ACS Nano article were Erhan I. Altinoglu, graduate student in materials science and engineering; Timothy J. Russin, graduate student in physics; James M. Kaiser, graduate student in pharmacology at Penn State College of Medicine; Brian M. Barth, a research associate in the Kester group; Peter Eklund, Distinguished Professor of Physics and Materials Science and Engineering; Mark Kester, G. Thomas Passananti Professor of Pharmacology; and Jim Adair, professor of materials science and engineering.