Those who could benefit from the therapy are children and adults with a history of stroke or those whose imaging tests show a high risk of stroke. 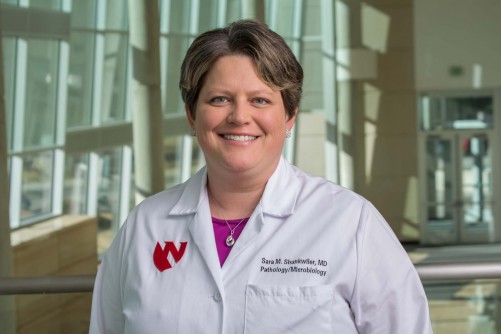 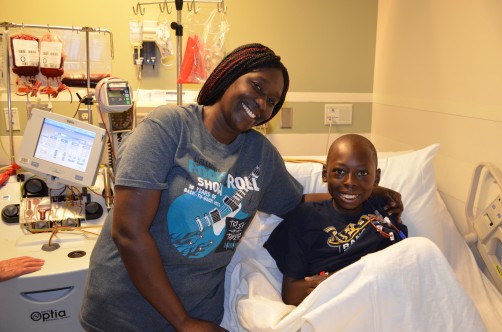 Newswise — Eleven-year-old Martin Mwita, of Omaha, has made more than 300 visits to health care facilities since he was a baby. Because of sickle cell disease, he’s suffered three strokes and countless other health episodes.

A therapy now available through Nebraska Medicine and the University of Nebraska Medical Center, will significantly reduce the risk of stroke for children and adults with severe sickle cell disease. The medical center recently began offering the state’s first pediatric chronic red cell blood exchange in conjunction with the American Red Cross. It offers a more effective and efficient treatment.

Sickle cell disease can lead to many complications including stroke, chronic leg ulcers, frequent pain crises and blood clots. It can result in an increased susceptibility to infection. About 1 in 600 African-Americans has sickle cell disease.

Those who could benefit from the therapy are children and adults with a history of stroke or those whose imaging tests show a high risk of stroke.

“Red cell exchange is not only an iron neutral procedure, it also can more quickly and more efficiently decrease the percentage of a patient’s red blood cells that are sickled,” said Dr. Shunkwiler, assistant professor, UNMC Department of Pathology and Microbiology and medical director of Blood Bank and Tissue Services at Nebraska Medicine. “This is the first time that chronic red cell exchanges for pediatrics patients have been performed in this area.”

Red blood cell exchange offers the risk lowering benefit of frequent blood transfusions but does so without increasing the iron stored in the body. Patients are connected to an apheresis machine which removes sickled red cells and replaces them with normal red cells from donors.

Patients typically have red blood exchanges every three to four weeks. The exchange usually takes two to three hours and uses a special kind of chest port that gives children more freedom to participate in activities such as swimming.

This is in contrast to chronic transfusion therapy which is required as frequently as every other week, takes most of a day to complete and can cause scar tissue, making it difficult to get and maintain good vein access. Currently four patients at the medical center are being treated with the therapy.

The American Red Cross has been providing therapeutic apheresis services to patients at Nebraska Medicine/UNMC for more than 30 years.

“We are excited to be a part of this new program and work with the hospital to serve pediatric sickle cell patients,” said Carri Harford, nurse and apheresis clinical services manager, American Red Cross Western Blood Services Division in Omaha. “Our previous experience has been in performing acute red cell exchange procedures to relieve symptoms and complications of sickle cell disease. This is the first time that chronic red cell exchanges for pediatric patients have been performed in this area.”

Dr. Koepsell said the availability of the therapy better serves children in the area suffering from sickle cell disease. “For the right patient, participating in red blood cell exchange can be life-altering,” said Dr. Koepsell, assistant professor, UNMC Department of Pathology and Microbiology, and medical director of the Nebraska Medicine Division of Transfusion and Transplantation Services.

Drs. Shunkwiler and Harper said it’s not uncommon for young children to have strokes. By the age of 14, 8 percent will have had a stroke and by 20-years-old, 11 percent. New evidence suggests that many sickle cell patients have small vessel frontal lobe strokes that can cause significant cognitive and functional deficits.

Dr. Harper said newborns are screened for sickle cell disease and those found with the disease are screened yearly for potential strokes beginning at two years of age using transcranial Doppler ultrasound, a painless screening tool.

Jacinta Mwita , mother of Martin Mwita, said the therapy improves the quality of the family’s life.

“The difference in his health since changing from transfusion to red blood exchange is incredible,” said Jacinta Mwita, a single mom who works full time. The best they could get his sickled red cells down to before was to 50 percent. Now it’s 5 percent.

“The longer intervals in between treatment will be one of the biggest benefits of finding more life balance so we don’t have to take much time away from everything else, especially school. It’s not just him, it’s everyone,” Jacinta said.

She is thankful to the blood donors who have improved not only Martin’s quality of life, but his family’s too. Though the family doesn’t know the identity of the donors who live in various states, the Red Cross contacts 20 who donate blood specifically to Martin because their blood matches Martin’s at a more complex level than just blood type.

“Isn’t that amazing? It’s incredible that someone we don’t even know would do this. I would love to meet them and say ‘thank you,’ she said. “I thank the staff and particularly those in the Lied Transplant Center. The nurses are incredible and the doctors care. Martin has practically grown up at the unit and they all know him by name.”

The disease is inherited and results when a child inherits one sickle gene from each parent. Parents who have only one copy of the gene are asymptomatic. However, if two carriers of the gene have a child, there is a one in four chance that child will have sickle cell disease. The average life expectancy of someone with the disease is about 45 years.

Sickle-shaped cells are not flexible and can stick to vessel walls, causing a blockage that slows or stops the flow of blood. When this happens, oxygen can’t reach nearby tissues. The lack of tissue oxygen can cause attacks of sudden, severe pain, often requiring treatment. Over a lifetime, the disease can harm organs and bones and cause death. 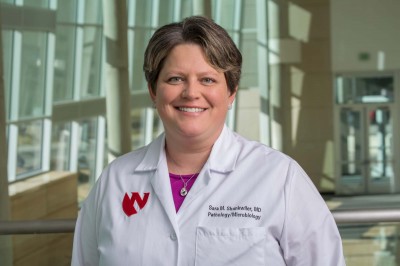 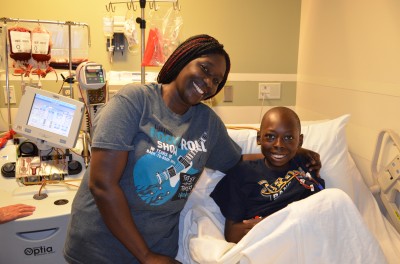