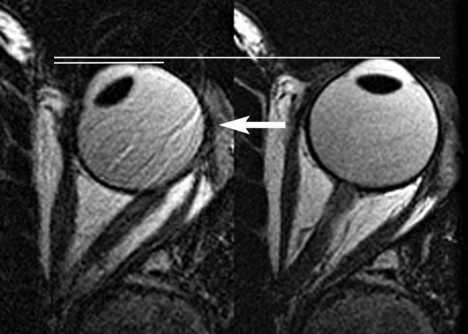 Magnetic resonance imaging (MRI) scans show the optic nerve acting as a tether, resisting eye rotation from central gaze (right) towards the nose (left), and causing the eyeball to retract (horizontal lines) when the eye rotates further into the tether effect. The black oval inside the eye is the lens at the front of the eye. 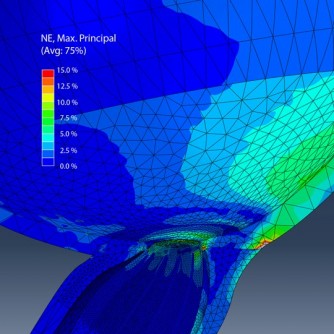 Computer simulation shows deformation caused by the eye rotating towards the nose six degrees beyond the point where the optic nerve begins to act as a tether. The “hotter” the color, the greater the local deformation. The researchers calculated deformation of donated human eyes using finite element analysis software.

Newswise — Common, unavoidable eye movements may be a cause of glaucoma in people with normal intraocular pressure (normal-tension glaucoma), according to new research supported by the National Eye Institute. The findings suggest that over time eye movement strains the optic nerve, the bundle of nerve fibers between the eye and brain. The research may also explain why tension-lowering eye drops can improve normal-tension glaucoma. Glaucoma is the second leading cause of blindness worldwide.

Elevated intraocular pressure within the eye is a widely recognized risk factor for glaucoma. Elevated pressure is thought to exert mechanical forces on the optic nerve, especially at its head, the disc-shaped region that surrounds the area where the nerve exits the back of the eye. Topical drops and surgical procedures aimed at lowering pressure within the eye are mainstay treatments for slowing the associated vision loss. However; “the fact that a considerable portion of people develop glaucoma despite having never had elevated IOP suggests that there must be a mechanism that is independent of intraocular pressure that causes damage to the optic nerve,” said the lead investigator of the studies, Joseph Demer, Ph.D., M.D., chief of pediatric ophthalmology and strabismus at the University of California, Los Angeles.

In a series of studies, Demer and colleagues explored whether repetitive strain from eye movements could damage the optic nerve and lead to vision loss. The researchers used magnetic resonance imaging (MRI) to directly visualize the optic nerve as people gazed in several directions, including straight ahead and in degrees of adduction (when the eye rotates inward toward the nose) and abduction (when the eye rotates out to looking away from the nose). They compared MRI findings from people with normal-tension glaucoma to those from healthy volunteers.

The results, published in Investigative Ophthalmology and Visual Science, show that for both groups the optic nerve and its surrounding sheath act as a kind of tether on the eyeball.1 For everyone, the tether was slack in abduction and taut in adduction. In the group with normal-tension glaucoma, however, the tethering in adduction caused the globe to retract significantly. This suggests that in people with normal-tension glaucoma, the optic nerve and the sheath are strained in adduction, which in turn mechanically loads the globe of the eye against the forces of the medial rectus, the muscle that controls horizonal eye movement. By contrast, the optic nerve and sheath in healthy study participants stretched freely, absorbing the strain of adduction on the eye’s tissues.

Everyday eye movements are likely to put even more strain on the optic nerve, said Demer, as the ocular range of motion in the study is about half that achieved by people under normal conditions. What’s more, our eyes are in constant motion. Rapid eye movements called saccades occur approximately three times per second, or an estimated 183,000 times daily, including those during rapid eye movement sleep. “It’s certainly plausible that some of these rapid eye movements would involve degrees of adduction that could have a physiological effect,” he said.

In a separate study published in the Journal of Biomechanical Engineering, Demer’s team sought to understand what effect such forces might have on various eye structures.2 Studying bovine specimens, they conducted computational simulations of eye movements. They calculated biomechanical properties such as tensile strength and point of failure of the optic nerve and other eye tissues. They then determined eye structures most susceptible to repetitive movement.

They extrapolated the findings from bovine to human tissue. To do so, they applied finite element analysis, a numerical method that solves an engineering problem by breaking it down into small components as a way of simulating how an object made of various materials might respond under different physical conditions. They found that adduction exerts stress on two key regions of the eye commonly damaged in glaucoma: the junction between the optic nerve sheath and the outer layer of the eyeball, or sclera, and the junction where scleral tissue around the optic nerve (peripapillary sclera) joins the lamina cribrosa, a mesh structure that the optic nerve passes through.

The researchers also observed that the tissue of the sclera is not uniformly stiff. And the stiffer tissues of the eye shift mechanical stress to the more pliant tissues, a pattern that is consistent with the location of changes seen with glaucoma. Demer noted that it’s as if the peripapillary sclera is a like a stiff raft floating on the more mushy sclera. The optic nerve sheath attaches to this raft of peripapillary sclera and with each adduction eye movement it causes whole optic nerve head to tilt.

If these findings are confirmed by additional studies, the next step is to investigate therapies that could possibly relieve the strain produced by eye movement, Demer said. Surgical procedures on eye muscles are already used to treat other conditions. Demer also proposed that the prostaglandin eye drops routinely prescribed to glaucoma patients to lower their intraocular eye pressure have a side effect that, interestingly, can benefit people with normal intraocular pressure. It’s been observed that the drops tend to cause the fat around the eye to atrophy, which in turn, causes the globe of the eye to sink back slightly into the socket. This may create some needed slack in the optic nerve. If that is the case, there could be some more targeted ways of achieving the same effect, he said.

"The meticulous investigations of the human orbit biomechanics done by Dr. Demer over the years have shed crucial insight into oculomotor function and disease,” said Houmam Araj, Ph.D., director of the NEI Oculomotor Systems Program. “The latest series of results are on a prevalent eye disease.”

This work was supported in part by National Eye Institute grants EY008313 and EY000331.