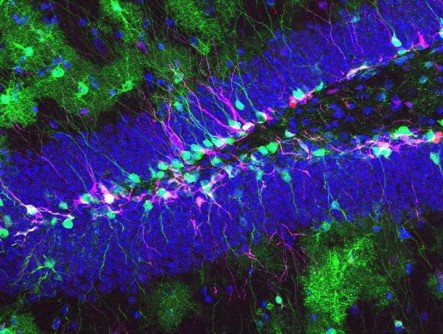 Department of Biomedicine, University of Basel

Newswise — To date, it has been assumed that the differentiation of stem cells depends on the environment they are embedded in. A research group at the University of Basel now describes for the first time a mechanism by which hippocampal neural stem cells regulate their own cell fate via the protein Drosha. The journal Cell Stem Cell has published their results.

In the adult brain, the hippocampus is responsible for specific forms of memory - a brain region that is also affected in diseases such as dementia, depression and epilepsy. The functions of the hippocampus are based on different cell types, some of which are generated throughout life by neural stem cells. Neural stem cells are generally accepted to produce three different cell types: neurons, astrocytes and oligodendrocytes. However, the adult hippocampus does not produce oligodendrocytes - the reason for this was so far not known.

Researchers from the Department of Biomedicine at the University of Basel have now found that the fate of adult hippocampal stem cells is not only controlled by their local niche, but also by a cell-intrinsic mechanism. Their study describes the central role of the enzyme Drosha in this mechanism. Drosha degrades the messenger RNA for NFIB in the adult hippocampal stem cells and prevents the expression of this transcription factor which is necessary for the differentiation of oligodendrocytes and thus blocks their development and therefore biases differentiation towards neurons.

The team lead by Prof. Verdon Taylor was able to demonstrate for the first time a cell-intrinsic mechanism regulating stem cell fate. «Our research results about the function of Drosha challenge the way we used to think about how stem cell fate is controlled», says cell biologist Taylor. His research group now wants to study if and how stem cells are able to modulate the activity of Drosha in order to satisfy demand.