Mutations in CHD7 cause severe birth defects known as CHARGE syndrome cases, which include severe and life-threatening heart malformations.

2-Dec-2020 4:10 PM EST, by University of Alabama at Birmingham
favorite_border 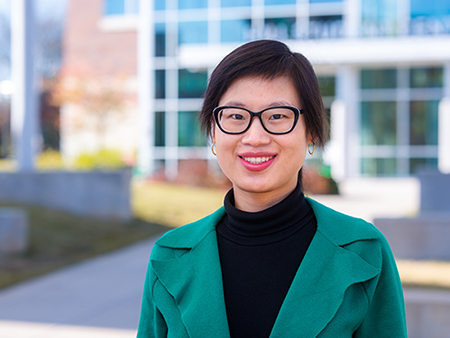 Newswise — BIRMINGHAM, Ala. – Research by Kai Jiao, M.D., Ph.D., and colleagues at the University of Alabama at Birmingham and in Germany has yielded fundamental insights into the causes of severe birth defects known as CHARGE syndrome cases. These congenital birth defects include severe and life-threatening heart malformations.

The researchers successfully inactivated the gene for CHD7 in the neural crest cells of mouse embryos, and then rigorously probed how this change in developing cardiac neural crest cells caused severe defects in the outflow tract and great arteries, leading to perinatal lethality. The heart defects in the embryos, and other birth defects, resembled human CHARGE syndrome defects. Human mutations in CHD7 are known to cause about 70 percent of CHARGE syndrome cases.

The study in Proceedings of the National Academy of Sciences, led by Jiao, co-corresponding author Karim Bouazoune, Ph.D., Philipps Universität Marburg, Marburg, Germany, and first author Shun Yan, Ph.D., a researcher V in Jiao’s lab, also clarifies a longstanding controversy. Previous attempts by others to alter CHD7 function in neural crest cells had failed to cause heart defects in several mouse models. This study’s improvement was use of better molecular scissors to delete a portion of the CHD7 gene.

A surprising finding in the current research was discovery of a new epigenetic function for CHD7, in addition to its well-established ATP-dependent chromatin remodeling activity. Chromatin is a DNA-protein complex consisting of the mammalian genome tightly wound around histone proteins to create a string of nucleosomes, like pearls on a necklace. Chromatin remodeling factors like CHD7 use the energy of ATP to remodel the chromatin, making selected genes available for expression. The turning-on and turning-off of select sets of genes is fundamental to embryonic development, during the time that a single fertilized egg grows into a complex fetus with at least 200 different types of cells, all originating from the same DNA genome, but differentiated using different gene programs.

In addition to the chromatin remodeling activity, Jiao and colleagues discovered that CHD7 acts in an ATP-independent fashion to recruit histone-modifying enzymes to target promoter or enhancer loci on the genome.

“Our findings strongly suggest that CHD7 can also directly recruit an H3K4 methyltransferase writer to target elements,” said Jiao, a professor in the UAB Department of Genetics. “The dual activities of CHD7 may represent an efficient mechanism to coordinate nucleosome remodeling and H3K4 methylation at these target loci. The mutual interaction between the CHD7 nucleosome remodeler and histone methylation machinery could form a positive feedback loop to stabilize epigenetic states at target elements.”

In other key findings of the study — in addition to showing an essential cell-autonomous role for CHD7 to regulate cardiac neural crest cell development — the researchers showed that a single point mutation in the CHD7 gene was sufficient to cause severe developmental defects and embryonic lethality in mammals. The researchers also used transcriptomic analyses to show that CHD7 fine-tunes the expression of a gene network critical for cardiac neural crest cell development. They followed that with a protein-protein interaction screen and found that CHD7 directly interacted with multiple developmental disorder-mutated proteins. One of these was WDR5, a core component of H3K4 methyltransferase complexes. That interaction with WDR5 led to the discovery of CHD7’s ability to recruit histone-modifying enzymes to target promoter or enhancer loci on the genome.

The researchers say that the CHD7 protein interactome suggests CHD7 is likely implicated in an even wider range of physiological processes and human diseases than previously anticipated.

“Importantly,” Jiao said, “we now provide a molecular framework of direct candidate interactors to investigate known or new CHD7 functions, as well as the molecular etiology of CHD7-associated diseases or phenotypes.”