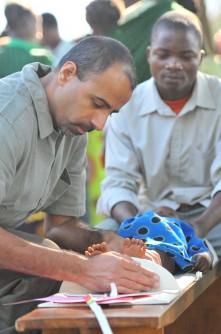 Indi Trehan, MD, measures the height of a young girl in Malawi as part of a malnutrition study. The research was aimed at reducing the high rate of relapse in children previously considered recovered after having been treated for moderate acute malnutrition.

Newswise — Children treated for moderate acute malnutrition — a condition suffered by an estimated 35 million children worldwide — experience a disturbingly high rate of relapse and even death in the year following treatment and recovery.

But without clear evidence that any one feeding regimen trumps another, the global health community has been divided on how best to treat these children and reduce the 37 percent rate of relapse.

A new study led by researchers at Washington University School of Medicine in St. Louis indicates that supplementary feeding for a set time period — 12 weeks — makes an impact but may not be as important as treating children until they reach target weights and measures of arm circumference. The latter is a strategy recommended by the World Health Organization (WHO).

However, to the researchers’ surprise, they found that the WHO targets are insufficient and that raising the weight and arm thresholds could significantly lower the rate of relapse.

The study is available online in the Journal of Pediatric Gastroenterology and Nutrition. It is accompanied by an editorial that stresses the importance of the findings and recommends they be implemented.

“These findings support a more sustainable recovery for malnourished children and move us another step closer to improving their care and long-term health,” said senior author Mark J. Manary, MD, the Helene B. Roberson Professor of Pediatrics. “While relapse rates remain a challenge we still need to overcome, this evidence should help us trim those rates. As it stands, far too many malnourished children relapse.”

The study, in rural Malawi in sub-Saharan Africa, involved 2,349 moderately malnourished children ages 6 months to 5 years who were fed nutritious, soy-based supplements and evaluated for 12 months following treatment. The researchers evaluated two feeding regimens. In the first, 1,967 children were treated until they met weight-for-height and arm circumference targets set by WHO, and in the other, 382 children were treated for 12 weeks.

The researchers found that when moderately malnourished children were treated to the WHO targets, 62 percent remained well-nourished. This compares with 71 percent of children fed nutritional supplements for 12 weeks. “When you’re talking about a disease that affects more than 30 million children a year, a nearly 9 percent increase in kids who remain well-nourished becomes a pretty significant improvement,” said first author Indi Trehan, MD, assistant professor of pediatrics.

But when they parsed the data, they found other factors at play.

When the researchers tried to pinpoint just what it was about the children who did better after having been treated for 12 weeks, they zeroed in on a compelling detail: that the greater a child’s weight-for-height score (WHZ) and the bigger the child’s mid-upper arm circumference (MUAC), the more likely it was that he or she would not suffer a relapse.

In evaluating a child for malnutrition, medical workers record a child’s weight, height and upper-arm circumference, a measure of lean body mass. The arm measurement is a reliable indicator in large part because children from 6 months to 5 years of age have the same minimum threshold. Medical workers also check children for edema — swelling of the feet — a sign of severe malnutrition.

According to WHO standards, a child with moderate acute malnutrition is treated until he or she reaches a weight-for-height measurement of two standard deviations below the mean. But given the high rates of relapse, many programs instead prefer a specified duration of treatment, generally 12 weeks.

However, Manary and Trehan — both Washington University pediatricians at St. Louis Children’s Hospital — found that raising the WHZ levels to 1.5 or 1.75 standard deviations below the mean from the current WHZ level of 2 standard deviations below the mean could significantly lower relapse rates. Likewise, raising the target upper-arm circumference of 13 centimeters from the current standard of 12.5 centimeters could shrink relapse rates.

“Establishing a higher threshold appears to be a better way to prevent relapse rather than treating all children for 12 weeks,” Trehan said. “A higher threshold could provide a more optimal balance between conserving costs of treatment and scarce food resources and ensuring that as many children as possible don’t relapse following treatment.”

Trehan, who collaborated with colleagues at the University of Malawi for the study, said it would be preferable if the research could be tested with a randomized control trial but that such an undertaking is unlikely because of the resources it would require.

Noting that there has been a paucity of quality studies to guide management of childhood malnutrition, the accompanying editorial called the study a welcome and important addition.

“This is crucial information for donor agencies and health ministries running supplementary feeding and other nutritional rehabilitation programmes,” wrote David A. Forbes, MBBS, of the University of Western Australia School of Paediatrics & Child Health, and David R. Brewster, MD, PhD, of the Hospital Nacional Guido Valadares in the Democratic Republic of Timor-Leste. “We now have evidence that children with even moderate degrees of wasting should be supplemented until they reach higher WHZ and MUAC endpoints than those currently recommended by WHO.”