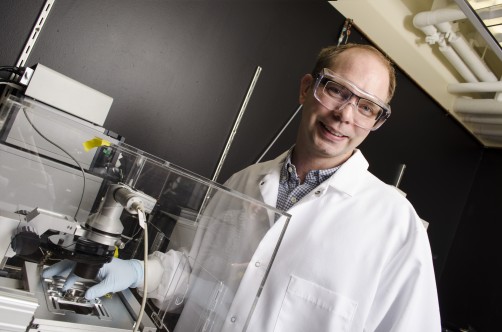 This microscope used for Center for Biological Control and Analysis by Applied Photonics (BCAAP) research can examine molecular interactions in thick samples, such as tissues, according to associate professor Adam Hoppe. His interactions with plant and animals scientists through BCAAP helped set the stage for BioSNTR. 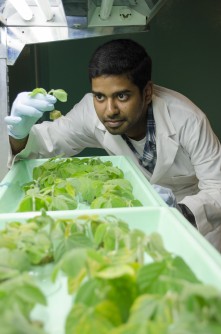 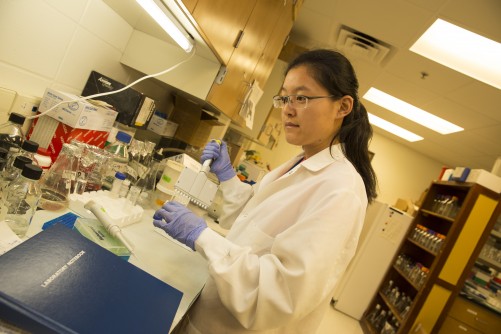 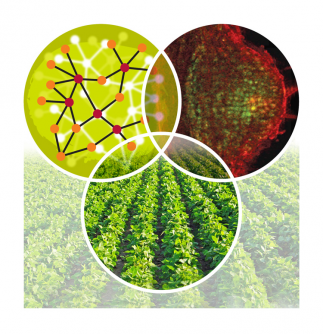 The BioSNTR logo emphasizes how imaging the biochemical interactions within cells can help scientists improve plant functions, such as soybean root nodule development.

Newswise — Scientists in South Dakota will examine living cells at a molecular level to find out how cells become cancerous, how viruses attack animals and humans and how plants can capture more nitrogen through a new collaborative research center called Biochemical Spatio-temporal NeTwork Resource (BioSNTR).

“Our goal is to create the infrastructure to catalyze innovation and discovery in bioscience and biotechnology,” said Adam Hoppe, associate professor of chemistry and biochemistry at South Dakota State University and director of BioSNTR. BioSNTR brings together plant and animal scientists, biochemists and biomedical engineers from six state universities, three tribal colleges and three private colleges along with medical researchers from Avera Research Institute and Sanford Research. Its focus on improving human health and agriculture is part of the state’s science and technology plan.

The center receives funding from the state of South Dakota and the South Dakota Experimental Program to Stimulate Competitive Research (EPSCoR) through the National Science Foundation EPSCoR Research Infrastructure Improvement Track I program. Imaging molecular interactions of cellsTools that let researchers track the biochemical machinery of living cells can help solve problems affecting the health of humans, animals and plants, Hoppe explained. Through an NSF Career grant, Hoppe designed and built a unique microscope setup capable of imaging the inner molecular working of living cells. “The main goal was to be able to see when three or more molecules are touching one another,” he said, because that is how information is relayed. By tagging these molecules with different fluorescent colors, Hoppe’s instrument is able to visualize biochemical communication by measuring the transfer of energy when these molecules touch, bringing the tags to within about one-ten-millionth of an inch of each other.

Hoppe developed a computer program that separates the changes in color intensity that occur from this energy transfer and produces movies of when and where the molecules interact. Hoppe and other researchers then use these data to understand cellular processes ranging from what triggers the development of cancer to how viruses work. Collaborating with researchers from the University of Nebraska Medical Center Eppley Institute for Research in Cancer and Allied Diseases, Hoppe applies this technology to study how molecular disruptions within white blood cells can lead to the development of leukemia. Improving plants, visualizing viruses New biological tools that allow scientists to sequence the genetic makeup of plants, animals and even humans provide more opportunities for Hoppe’s imaging techniques to help scientists identify which genes are responsible for specific cell functions and to analyze emerging viruses.

Hoppe has collaborated with SDSU College of Agriculture and Biological Sciences researchers through his work with the Center for Biological Control and Analysis by Applied Photonics (BCAAP), a South Dakota governor’s research center established in 2010. Many of these interactions set the stage for what has become BioSNTR, Hoppe pointed out.

Virologist Feng Li, a professor in the biology and microbiology and veterinary and biomedical sciences departments, said that Hoppe and fellow biochemist, assistant professor Suvobrata Chakravarty, played a vital role in his discovery of a new influenza virus.

“They helped advance our understanding of this new emerging influenza at the structural and evolutionary levels,” Li noted. That led to national and international recognition, including a National Institutes of Health grant for Li and his colleague, immunologist Radhey Kaushik, to study this new virus.

Assistant professor of plant science Senthil Subramanian is identifying the key genes that control the formation of nodules in soybean roots, which house bacteria that fix nitrogen. His goal is to increase the plant’s nitrogen-fixing capabilities and thus reduce the need for chemical fertilizer.

Subramanian is collaborating with Hoppe to image the biochemistry of newly identified genes that are involved in nitrogen fixation. This has become one of the central issues to be explored through BioSNTR, Hoppe noted. Jim Rice, chemistry and biochemistry department head and SD ESPCoR director, said, “This is an example of the collaboration that is so important in today’s research work.” 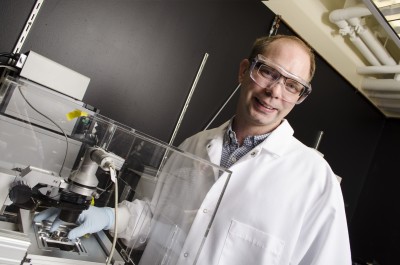 Caption: This microscope used for Center for Biological Control and Analysis by Applied Photonics (BCAAP) research can examine molecular interactions in thick samples, such as tissues, according to associate professor Adam Hoppe. His interactions with plant and animals scientists through BCAAP helped set the stage for BioSNTR. 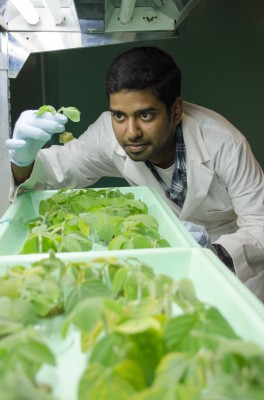 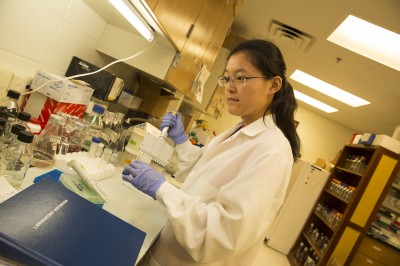 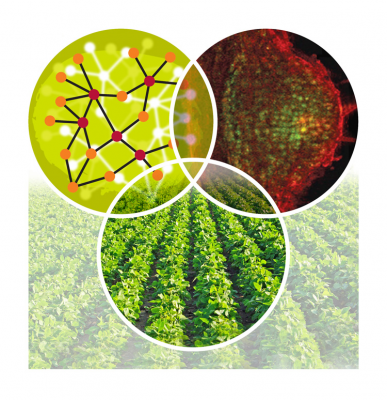