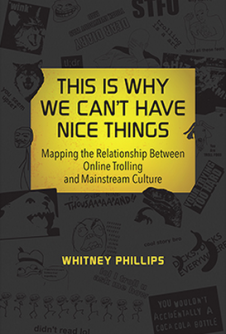 Newswise — We’ve all observed them: online trolls who post insensitive and inflammatory comments on the Internet to provoke and upset as many people as possible.

If we could just eliminate trolls from the Internet the world would be a friendlier place, right? Not exactly, says HSU Communication Lecturer Whitney Phillips.

In her recent book, This is Why We Can’t Have Nice Things: Mapping the Relationship between Online Trolling and Mainstream Culture, Phillips argues that trolling—widely considered obscene and deviant—is actually just a reflection of contemporary society and our cultural values.

“What trolls do is engage with a sensationalistic story and try to incite emotional responses to upset people. It’s exploitative and it’s problematic, but it’s exactly how sensationalistic media works,” says Phillips. “It’s how you get paid views in a web-based click economy.”

Phillips’ research focused on self-identifying trolls on 4chan, an anonymous image-based bulletin board launched in 2003. Specifically, she looked at users on 4chan’s /b/board, one of the Internet’s most infamous and active trolling spots.

To get inside the minds of trolls, Phillips infiltrated their world. She spent six years interviewing trolls and spent thousands of hours observing their bad behavior online.

What she found is that trolling often amplifies the ugly side of mainstream behavior. In other words, trolls capitalize on social beliefs and attitudes like misogyny, racism, ableism, and entitlement.

“Trolling ends up being this grotesque pantomime of what is totally normal,” says Phillips. “When it comes down to it, the bad guys online are not that different from the good guys.”

Phillips doesn’t believe that trolls should be left off the hook ethically. But she does believe that the societal issues that allow their behaviors to flourish should be addressed.

“If lawmakers and pundits really are serious about combating trolling, they should first take steps against the most racist, misogynist, and homophobic discourses in mainstream culture,” she says.

She also believes that sensationalistic media is largely to blame for their prevalence.

“As long as sensationalistic media is rewarded with page views and ad revenue, trolling will always have an outlet and an audience,” she says.

Phillips recently read excerpts from her book at SXSW 17 in Austin, Texas. For more information on the book, or to purchase it online, visit amazon.com.