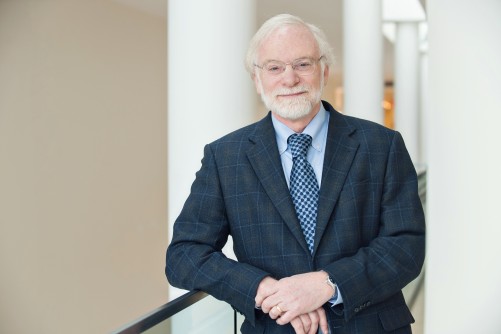 Newswise — ANN ARBOR, Mich. — Breast cancer stem cells exist in two different states and each state plays a role in how cancer spreads, according to an international collaboration of researchers. Their finding sheds new light on the process that makes cancer a deadly disease.

“The lethal part of cancer is its metastasis so understanding how metastasis occurs is critical,” says senior study author Max S. Wicha, M.D., Distinguished Professor of Oncology and director of the University of Michigan Comprehensive Cancer Center. “We have evidence that cancer stem cells are responsible for metastasis – they are the seeds that mediate cancer’s spread. Now we’ve discovered how the stem cells do this.”

First, on the outside of the tumor, a type of stem cell exists in a state called the epithelial-mesenchymal transition (EMT) state. These stem cells appear dormant but are very invasive and able to get into the bloodstream, where they travel to distant parts of the body.

Once there, the stem cells transition to a second state that displays the opposite characteristics, called the mesenchymal-epithelial transition state (MET). These cells are capable of growing and making copies of themselves, producing new tumors.

“You need both forms of cancer stem cells to metastasize and grow in distant organs. If the stem cell is locked in one or the other state, it can’t form a metastasis,” Wicha says.

The findings, which are published in the January issue of Stem Cell Reports, raise a number of questions about how to treat or prevent metastatic breast cancer. Researchers must now understand whether new therapies must attack both forms of the stem cell to be successful. Different pathways regulate each type of stem cell, which suggests that effective therapies must be able to target multiple pathways.

In addition, current tests that look at tumor cells circulating in the blood to help determine whether the cancer is spreading do not appear to capture the EMT stem cells, which are the cancer cells that travel through the blood. U-M researchers are working with colleagues from the U-M College of Engineering to develop new tools to isolate the EMT stem cells from the blood of cancer patients.

“Now that we know we are looking at two different states of cancer stem cells, we can use markers that distinguish these states to get a better sense of where the cancer stem cells are and to determine the effectiveness of our treatments,” Wicha says.

The study looked specifically at breast cancer stem cells but the researchers believe the findings likely have implications for other cancer types as well.

Breast cancer statistics: 234,580 Americans will be diagnosed with breast cancer this year and 40,030 will die from the disease, according to the American Cancer Society

Disclosure: Wicha holds equity in OncoMed Pharmaceuticals, receives research support from MedImmune and Dompe, and is a scientiﬁc adviser to MedImmune, Verastem, Cerulean and Paganini